For the first time since 2015 Valentino Rossi, Jorge Lorenzo, Marc Marquez and Dani Pedrosa gathered together for the traditional pre-race press conference. They were joined by rising stars Andrea Iannone and Maverick Viñales, both out to assert themselves as MotoGP™ aliens and contenders for victory in 2016.

Another season begins for the MotoGP™ World Championship but 2016 is like almost no other before. Not since 2002, when the four-stroke era began, has the championship undergone such radical technical changes. New Michelin tyres, revised fuel limits, a spec ECU and unified software have already shaken up the grid during testing and the first race of 2016 presents a world of unknowns.

Reigning MotoGP™ World Champion Jorge Lorenzo (Movistar Yamaha MotoGP), who has been one of the strongest riders throughout testing, opened the press conference: “Not a lot of things change from the outside where the people can see the bikes. For the riders, it’s really a big difference. Firstly with the tyres, the Michelins offer a completely different feeling on the bike and also with the new electronics, the same for everyone, are less sophisticated and much more difficult to ride and control, especially with the throttle. Anyway the pre-season has been very very good, better than we expected. In the three tests we did, we got a good feeling and did some impressive lap times.”

All the changes have left the riders with many still unanswered questions, Lorenzo is unsure about how the tyres will behave during the opening laps: “In the last five or six years you could start very very fast from the first corner of the first lap, now it’s a little more complicated as we have to understand the limit in the first few laps. It’s also important the race pace, the physical condition as it looks like it will be a little more demanding in that area.”

After winning the Commercial Bank Grand Prix of Qatar in 2015, Valentino Rossi (Movistar Yamaha MotoGP) produced one of the best seasons of his career, missing the podium in just three races. It was a season full of epic battles and incredible comebacks and ‘The Doctor’ is ready for another exciting year: “This year everything will be very interesting as we have a lot of differences, especially about riding the motorcycle. We changed things that make a big difference, the tyres are different and also the electronic system is a little more basic. During the winter season we saw a lot of riders who were very close in their performance, looks like more than last year. It means that to arrive at the front you have to work very well during the weekend and arrive strong on Sunday.”

During the Phillip Island Test former 500cc front-runner Luca Cadalora appeared alongside Rossi, working with him as another set of eyes on the track: “He will work with me through the season. We worked together and tried some things in the test. It’s always interesting to have a former rider like Luca with a lot of experience and a good vision around the track. During the test we found something interesting so we’ll continue together.”

Meanwhile Marc Marquez (Repsol Honda Team) heads into 2016 looking to continue improving after taking major steps forward in the Qatar Test:  “This year has not been an easy pre-season looking at the results. But we improved and we kept a constant pace, a progressive line towards the most important and it looks like here in the last test in Qatar we did a huge step and we were closer. Anyway, we know we struggle on this track because it’s one of the worst tracks for us but the motivation and ambition of the first race can always supply what you need.”

It looks set to be an incredibly close, but Marquez remains aware that Qatar may not be representative of the riders’ true level: “On the test it was amazing how close the times were. I know that in this first race the times will be really close because we did a test here so everybody already has a good pace and a good setup and it will be nice this first race. Then when we go to Argentina and to Austin we will see more the difference where we are. But we must start well this season.”

Dani Pedrosa (Repsol Honda) was also present at the press conference. It was announced here in Qatar last year that he was suffering from arm pump so severe he was considering retirement, fortunately no such issues are present now: “The pre-season went quite OK physically and we did quite a lot of training and we’re quite prepared for this reason. For the technical part we’re a little more in trouble compared to last year but we’re closing the gap and I think we’re improving. Now it’s race weekend, this is quite different to testing and you focus a lot more on going fast and less on checking things on the bike. I’m more motivated in the GPs than in the test.”

The 2015 race was Andrea Iannone’s (Ducati Team) first MotoGP™ podium, the Italian building on the great result throughout the year to challenge for many more podiums. With constant work back in the Ducati factory, there’s little doubt the Italian will again be in mix, especially in Qatar, a track that has classically suited Ducati: “For sure we’re really strong, but I think everyone else, Dani, Jorge, Maverick, Valentino, every rider in MotoGP is really strong. But for sure we want to improve and we want to go better than 2015 and for sure I think and I want to win my first MotoGP class race. For sure this is my objective and I try my best at this track and from this race onwards.”

Much like Pedrosa, Iannone suffered from a lingering issue throughout the 2015 season. He had been expected to undergo surgery on his shoulder during the off-season, but opted to focus on physiotherapy: “The injuries now are an old story for me. I’m really happy with the shoulder, during the winter I worked a lot with my personal trainer and I’m working in a really good way and really happy.”

Perhaps the most impressive rider in testing was Maverick Viñales (Team Suzuki Ecstar), the Suzuki rider topping the Phillip Island Test and ending third at the Qatar Test. All eyes are on Viñales as many are expecting big things from him in 2016 and beyond: “For sure it was an incredible step for us. It was really important the experience we got last year, this year we could work better and with more concentration and calm. This was the biggest difference from last year. The bike improved, the engine improved and we got the seamless. Also about the electronics, they make everything more similar and for us and that’s better and then about the tyres, I think we have a good feeling. I feel really good and I think I can be so strong with these tyres. Anyway, it was a test, now it’s a race weekend and we feel motivated, calm and hungry to start the race.”

Podiums are the main aim for both Viñales and Suzuki in 2015, but he knows it will be an uphill battle even with all the changes: “For sure I dream to fight with them at the top with the top riders in this world. I need to be realistic and to think if my bike is on the level to go on the podium, or if I am on the level! We showed in the test we are competitive but still we need a little more.” 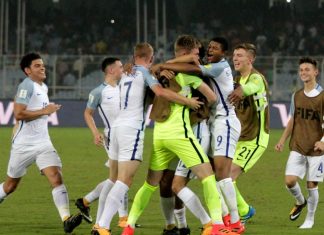 Brazillian flair up against English resolve

0
Kolkatta: Traditional powerhouse Brazil will rely on their much-admired natural flair when they take on a resolute England in what promises to be a...