DOHA, 6 OCTOBER 2015: The opening day of the Doha 2015 World Boxing Championships witnessed a stunning exhibition of talent and technique as leading boxers from all over the world including Team Qatar started on their journey and quest for world championship glory at the Ali Bin Hamad Al Attiyah Arena.

The sporting entertainment came fast and furious much to the delight of local and international fans that packed into the arena, with boxers from five weight categories taking part in a highly competitive first of day competition.

Several of the world’s finest boxers went head to head in 40 bouts across the first day with each experiencing contrasting emotions that boxing offers. Only the winner qualifies for the next stage, while the defeated leaves with his dreams of a world title gone. Such is life at the top of the global boxing elite – hard, fair and ultra-competitive. And with bouts lasting only three rounds for three minutes each, the intensity and pace in the ring was gripping for all. Speaking at the end of a hugely successful opening day, Yousuf Ali Al Kazim, President of Qatar Boxing Federation and Executive Director of the LOC, said:

“Qatar has been eagerly waiting for this day to arrive and today we’ve just had a small taste of what this prestigious championship will deliver. The venue is world-class, the talented boxers on display are truly world-class and the stage is set for the next nine days of breathtaking action in the ring. We have the perfect ingredients to demonstrate Qatar’s love of sport and introduce boxing to a new audience in the Middle East. This is the sport of boxing’s showcase event, being broadcast to over 500 million households so it’s a proud day for our nation with Qatar in the spotlight once again as a host of a major international sporting event. I’d encourage any sports fan to come along and enjoy the special atmosphere.”

It was also a perfect start in the ring for Team Qatar with Qatar’s Thulasi Tharumalingam defeating Kagiso Bagwasi of Botswana by a unanimous point’s decision in the preliminary round of light welter weight category (64k).

“I feel overjoyed about this situation and proud to represent Qatar. It was a great feeling to compete in this incredible stadium and I will now take every fight step by step. Walking out tonight to enter the ring was just as inspiring as witnessing the opening ceremony. I want to qualify for the Olympics in Rio and I know to do this I need to win. That’s my goal.”

The second boxer to represent Team Qatar, Alhadi Abdulrahman, also in the Middle Weight Category unfortunately experienced the harsh side of boxing exiting the championship at the preliminary stage. Speaking after his defeat to Venezuelan Endry Saavedra Pintom, Abdulrahman said: “Even though I didn’t win this isn’t the end of the story for me. This has been the biggest moment of my life and I hope it can open new doors for me in my career. I will certainly be back to support my teammates as a fan. It’s incredible to have the World Championships in Doha, I hope everyone will join the celebration of this wonderful sport.”

Earlier in the first bout of the Doha 2015 championship light flyweight favorite Rogen Landon from the Philippines and Argentina’s Leandro Blanc, where Blanc went easily through to the next round on a unanimous decision of 3:0. One of the outsiders to the middle weight title, USA’s industrious pugilist Anthony Campbell, went on to win over Italy’s Salvatore Cavallero after a narrow and hard-fought 2:1 decision.

“I started out great, but for some reason I slowed down in the second round. I had to go and pick it up in the third round and go big. My coaches told me to keep my foot on the gas and go all-in. Now I feel I can go all the way and win it, and people better watch out because I’m coming for the title!” a confident Campbell said right after his victory.

India, meanwhile, had three boxers battling in the afternoon session. While Manoj Kumar got eliminated by Morocco’s Abdelhak Aatakni in the welterweight category, both Shiva Thapa (54 kg) and Krishan Vikas (75 kg) are through after respectively overcoming Khalil Litim from Algeria and Hungary’s Zoltan Harcsa.

Vikas hopes to see a lot of boxing fans coming to support him for his next bouts in Doha:

“It feels great to get through to the next round. My shape is really good after fully recovering from a number of small injuries, and I hope to see not only Indians but all the people living in Qatar coming out to watch us the next few days.”

The afternoon also saw one of the key contenders for the 64 kg title, namely Canada’s Arthur Biyarslanov take on Lorenzo Sotomayor Collazo from Azerbaijan. That did not end well for Biyarslanov who sensationally crashed out of the Worlds in a comprehensive 3:0 unanimous decision.

The opening afternoon session was compleled by Jason Whateley from Australia and Roman Fress from Germany. In an intense, frenetic performance the German heavyweight boxer came out on top in a tight 2:1 decision.

“I can’t even begin to explain how amazing it is to win after putting in so much effort. This was such a tough bout, but to come through with a win, here in this very, very good stadium is just unbelievable. I’ve never seen a better boxing venue in my life! Doha is great!” a relieved Fress said.

The second day of Doha 2015 will preliminary rounds split into two sessions, one in the afternoon from 2pm-5.15pm, and the evening session from 7pm-10pm. In each session there are two rings with simultaneous bouts.

The preliminaries carry on until Friday night, and will still be in two separate sessions across two rings in the same hall at the Ali Bin Hamad Al Attiyah Arena. Please note that the times will change, with the sessions starting and ending 3pm-5.30pm and 7pm-9.30pm. 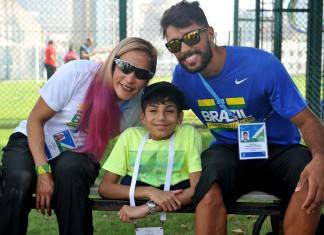 0
Doha, Qatar: With just one day to go until the Doha 2015 IPC Athletics World Championships, the ‘My Incredible Story’ film series has come...