QASR AL SARAB (UAE) –Monday, April 3rd 2017: Qatar’s Nasser Saleh Al-Attiyah found himself alongside Austrian KTM Red Bull Factory team rider Matthias Walkner at the top of the leader board of the Abu Dhabi Desert Challenge POWERED BY NISSAN, after the second 289.39km Nissan stage of the event through the Rub Al-Khali on Monday.

The Toyota driver claimed the fastest time on the day’s stage, held in punishing heat across the mighty dunes of the UAE. Al-Attiyah’s stage win meant he extended his lead over Abu Dhabi Racing’s Sheikh Khalid Al-Qassimi to 23min 03sec heading into the night halt at Qasr al Sarab.

“Today was a good day for us. It was not an easy stage. The stage is called Nissan. It is very difficult and hard. We just need to take care. To win by a big gap and have a big lead from Al-Qassimi is good,” said Al-Attiyah.

Sam Sunderland’s starting position meant that the overnight leader was hardly going to win the day’s stage and the Dakar champion ceded time to his rivals in the motorcycle category. Husqvarna’s Pierre Alexandre Renet began the day fifth on the road and pressed on to take the stage win from Monster Energy Honda’s Paolo Gonçalves.

New overnight leader Walkner was third quickest. “I did not know that I was leading),” said the Austrian after the finish. “Saying that, tomorrow they take the gap back. Hopefully I can finish on the podium. Tomorrow, the guys will take three or six minutes and the lead is changing again. It has been a good two days and I feel more confident riding in the dunes. I get into it and I enjoyed it.”

Sunderland said: “You always lose time when you start in front. I opened all the way for nearly 300km (the stage) and only Pablo (Gonçalves) and Matthias physically caught me. Of all the riders here, that meant it was a good day. This race is strange with the strategy, you know. You kind of swap times each day. Tomorrow I start back and it will be the opposite. You just have to take each day as it comes. It’s been really hot the past few days and it’s really unpredictable out there. The bike is good. I am happy. The team have done a great job.”

Stage winner Renet was upbeat: “Yes, really happy. Today I start five, so it’s easier for me because I have the line and the tracks. It’s good to have a win at this rally. The heat is really high and, with the sun, you do not see so easy. I guess it is the same for everyone.”

Al-Attiyah began the gruelling loop stage with a cushion of 11in 35.1sec over Abu Dhabi Racing’s Sheikh Khalid Al-Qassimi and the Overdrive Racing Toyota Hilux driver pressed home his advantage from the front for the second day in the cars. Czech driver Martin Prokop produced another useful performance in the Jipocar Ford F-150 Evo to set the fourth quickest time behind Qatar’s Mohammed Abu Issa and the former WRC star leapt into third place in the overall rankings. Russian Vladimir Vasilyev got stuck in the dunes and slipped to fifth.

Poland’s Kamil Wisniewski maintained his lead in the quads from a charging group, even though the day’s stage win went to the Dutchman Kees Koolen on a Barren Racer One 690. Wisniewski now leads the class by 5min 42.8sec from Kuwait’s Fahad Al-Musallam.

“It’s been another very difficult day at the Abu Dhabi Desert Challenge with heat and fatigue again taking their toll,” said event founder and ATCUAE President Mohammed Ben Sulayem. “It’s pleasing to see the local drivers showing through and using their experience and knowledge of the dunes to carve their path towards good results.”

Monday – as it happened

Sunderland and Al-Attiyah led their respective motorcycle and car rivals into the second selective of 289.39km that featured considerable sections through the notorious dunes of the Rub Al-Khali. Further down the field, Poland’s quad rider Rafal Sonik was hoping to recover from the persistent fuel issues that had plagued his Honda after the refuelling on Sunday and Qatar’s Adel Abdulla was given back the substantial time he had lost at the scene of the accident involving the injured Andrey Chipenko and slotted into fourth in T2 with his Nissan Patrol.

As the leading group of riders remained together through the first two passage controls, Khalid Al-Falaisi was forced to retire his Honda with mechanical trouble and wait for the sweep truck to collect it. Renet benefited from his starting position to take the virtual bike lead at PC2, while Sunderland dropped nine minutes to his rivals. Riders outside the top 15 had begun the stage in a pair of spectacular mass starts.

Al-Attiyah extended his advantage over Al-Qassimi by just under three minutes through PC1 and to a little under six at PC2, as the leading group of riders began the final crossing of the dunes after a third checkpoint at Arada. Renet held on to snatch the stage win, but Walkner grabbed the overall lead and Al-Attiyah tightened his grip on the car section to 23min 03.1sec.

The dunes played havoc with competitors running down the order. Both Khalid Al-Jafla and Patrice Garrouste crashed, riders Elio Aglioni and Jan Zatko were retrieved suffering from possible dehydration and Vasilyev and Zapletal both got stuck in the dunes, the Russian enduring a sandy delay at the same point as quad rider Camelia Liparoti was also festooned in the sand.

Tomorrow (Tuesday), competitors tackle the second of three loop stages around the southernmost extremities of the UAE. The 288.73km special starts at the desert outpost of Tharwaniya off the road to Mezaira’a and winds its way through the towering dune complexes of the Rub Al-Khali to finish 19km north of Hameem. The route passes the famed Moreeb Hill before heading south and running along the frontier with Saudi Arabia. It then returns to the bivouac for a refuelling stop for the bikes at PC1.

For live timing and tracking during the race: 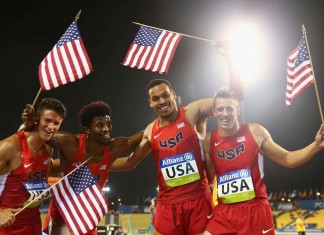 Doha 2015 ends with four golds for Walid Ktila as China...

Qatar’s Frijns ready to bounce back to the podium as the...