DEAD SEA (Jordan): Qatar’s Nasser Saleh Al-Attiyah and French co-driver Matthieu Baumel edged into a slender two-second lead after the opening timed super special of the Jordan Rally, held in close proximity to the residential district of Abdoun in Amman, on Thursday afternoon.

Needing just to finish the three-day rally to secure an 11th regional title in 13 years, Al-Attiyah also has to err on the side of caution this weekend, because a date clash with a shooting competition means that he will miss the penultimate round of the FIA Middle East Rally Championship in the Sultanate of Oman at the start of November.

“It was a nice location for the start, but a spectator stage is all about entertaining the spectators and not taking any risks,” said Al-Attiyah. “The rally proper really starts on Friday morning.”

Yazeed Al-Rajhi finished third overall behind Al-Attiyah and Vladimir Vasilyev in last week’s Rally of Morocco, but the Saudi missed the last three rounds of the Middle East rally series and has only 15 points earned in Kuwait to show for his regional special stage efforts this season. He and Ulster co-driver Michael Orr finished the opening stage in second place.

Abdulaziz Al-Kuwari suffered a major setback in the build up to the rally when his service vehicle was delayed at a border control. The Qatari’s pre-event preparations were badly disrupted as a result, but he posted an opening time of 2min 12.2sec and held third position.

Khalid Al-Suwaidi’s preparations were also disrupted and the Qatari duo will be hard pushed to continue over the remaining two days without sufficient spare parts for their Ford Fiesta RRCs. Al-Suwaidi holds fourth.

Jordanian driver Husam Salem is the clear favourite to win Group N for the second year with co-driver Nancy Al-Majali and the Mitsubishi driver started well with the fastest time in the showroom category.

Qatar’s Rashid Al-Naimi and Italian navigator Nicola Arena are hoping to take full advantage of the absence of some of their Group N championship rivals and hold second in Group N and sixth overall – a mere two seconds behind their Jordanian rivals.

His Royal Highness Prince Feisal Al-Hussein, chairman of Jordan Motorsport, flagged the cars away from the Abdoun start in front of a bumper enthusiastic crowd, who had gathered to witness some of the region’s finest drivers start their three-day challenge for Jordanian supremacy. Nasser Khalifa Al-Attiyah, QMMF president and FIA vice-president MENA, was also in attendance.

With reverse seeding used for the ceremonial start, the Jordanian crew of Asem Aref and Moad Arja were the first off the start ramp in their colourful Fiat Stilo and posted the target time of 2min 53.9sec.

Equipment homologation issues forced the Jordanian crew of Lina Hadadi and Barkev Shadjan to leave the FIA category and join three other Group S entrants running at the tail end of the international rally.

There will be 10 special stages in the Jordan Valley and Dead Sea areas on Friday, starting with a run through the 11.91km of the Suwayma stage from 09.05hrs. The first car returns for the final service of the day at the purpose-built service park overlooking the Dead Sea at 15.44hrs. 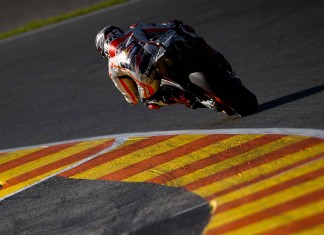 0
Having spent most of Tuesday at the Comunitat Valenciana – Ricardo Tormo adjusting to the new Michelin tyres and specification changes to next year’s...

Superb British Lionhearts roar into play-offs with superb 4-1 win over...