Russia’s Vladislav Frolov claimed his second gold of the 2015 IPC Athletics World Championships in Doha, Qatar, one of five athletes to smash world records on Monday (26 Ocotber), the fifth day of competition in the Middle East.

Frolov, who won European gold in Swansea, Great Britain, last year added nearly two metres on to the mark he set just four months ago as he took the lead with his first throw before managing a massive 35.94m in his second attempt.

“I am so happy, it was a great competition and I am thrilled to be world champion,” said Frolov, who also won the shot put F32 title on Saturday.

China’s Fuliang Liu also broke his own world record, adding one centimetre on to his triple jump T47 mark from London 2012 before extending that a further eight centimetres with 15.29m in his fourth leap.

Iran’s Siamak Saleh Drajzadeh threw past the 11 metre mark in all six of his throws in the men’s shot put F34, breaking the previous world mark of 10.68m in superb style.

Croatia claimed their first gold medal as Branimir Budetic threw a massive 65.72m in his opening attempt of the men’s javelin F13. It was a distance that proved too good for his rivals as Iran’s Seyed Erfan Hosseini Liravi took silver (59.97m) and Serbia’s Nemanja Dimitrijevic won bronze (59.82m).

Out on the track it was an evening dominated by distance events.

Raymond Martin, who won five gold medals at Lyon 2013, secured his first medal of the championships with a win in the 1,500m T52.

The American set out quickly but the field kept in touch and made Martin (3:49.41) work hard for his medal down the home straight. Japan took silver and bronze through Tomoki Sato (3:49.62) and Hirokazu Ueyonabaru (3:49.79).

“That’s closer than I expected, I had to keep looking over my shoulder in the last 100 metres to ensure he (Ueyonabaru) didn’t close,” said Martin. “I think had there been another 10 metres in that race then he probably would have won.”

There was a thrilling finish to the men’s 1,500m T13 as early leader El Amin Chentouf was overtaken with 200 metres to go by Algeria’s defending champion Abdellatif Baka and Morocco’s Abdelillah Mame. Baka sprinted on but he was no match for Mame who stormed past in the final 50 metres to claim gold (3:54.34).

Winner of the 1,500m earlier in the week, the powerful 38-year-old controlled the race from the front and proved too strong for his rivals as he pushed hard down the home straight with Switzerland’s 2013 champion Marcel Hug (10:56.54) trying hard to catch him.

With two world titles to his name and three races remaining, the Thai looks determined to end the Swiss Silver Bullet’s recent domination of the T54 events.  Hug, who won five golds at the world championships two years ago, had to make do with silver as Tana’s compatriot Prawat Wahoram (10:56.54) won bronze.

Tunisia’s Walid Ktila made it two from two with two more to go as he added victory in the 800m T34 to add to his 400m win on Saturday. The reigning Paralympic and world champion never looked in doubt as he took the win with a new championship record (1:45.71).

“I’m happy to be here. I felt like I was a good ambassador for my country and I worked hard all season and these efforts are bearing fruit now. I’d like to thank all Tunisians who supported me – they encouraged me to do my best,” said Ktila.

There was jubilation for Chile’s Cristian Valenzuela (15:52.64) in the men’s 5,000m T11 as he took gold ahead of Canada’s silver medallist Jason Dunkerley (16:11.22) and Japan’s bronze medallist Shinya Wada (16:31.04). But it was heartbreak for Brazil’s early leader, the 2013 champion Odair Santos who had a commanding lead before exhaustion got the better of him with 100 metres to go.

Chinese athletes took the top two spots in the women’s 800m T54 as Lihong Zou and Wenjun Liu set off hard from the gun. Zou took the tape in 1:51.13 as her compatriot cruised over the line for silver (1:51.51). The Netherlands’ Margriet van den Broek won the battle for bronze (1:52.99).

South Africa’s Anrune Liebenberg converted silver in 2013 in to gold in Doha as she got the better of Cuba’s Yunidis Castillo (59.79) in the women’s 400m T47 with a terrific final 200m, striding home to victory with a new personal best (56.65).

“This is what I have trained for, it feels absolutely amazing to win here in Doha,” said Liebenberg.

“There are not words that can describe this, I knew the Cuban was a real handful, but I got there and it’s just amazing.”

It was a second silver medal for Castillo having already finished runner up in the long jump T47 on Friday. Bronze went to Russia’s Alexandra Moguchaya (1:01.50).

Namibia secured their first medal of the championships as Johannes Nambala took gold with a new African record in the 200m T13 (21.74). He was chased hard all the way by Australia’s Chad Perris who was rewarded with an Oceania record (21.82) whilst bronze medallist Mateusz Michalski of Poland set a new personal best (21.92) for bronze.

Belgium’s Marieke Vervoort picked up her second gold of the championships as she powered home to win the 100m T52 (20.39) after a terrific start. The USA’s Kerry Morgan (20.97) took silver and Japan’s Yuka Kiyama won bronze (25.37).

Back in the field, Tunisia’s Raoua Tlili was another athlete to collect her second gold of Doha 2015, dominating the shot put F41 from start to finish with a season’s best throw of 9.78m. Silver went to Brazil’s Kelly Cristina Peixoto (7.84m) and bronze to Australia’s Claire Keefer (7.62m).

There was a world record for Ireland’s Noelle Lenihan (31.64m) in the women’s discus F38 as she added one centimetre on to the previous mark which had stood for nine years. But it wasn’t enough for gold as China’s F37 thrower Na Mi successfully retained the title she won two years ago with a new championship record (33.59m). Canada’s Renee Foessel managed 30.39m for bronze.

A shock defeat for long jump T42 world number one Daniel Jorgensen (6.02m) saw the Dane lose out on gold to the world number two Atsushi Yamamoto of Japan, who took the lead with a third round leap of 3.18m before managing a championship record 6.29m in the final round to seal the win. Bronze went to the USA’s Regas Woods (5.56m).

Victory in the men’s javelin F55 went to Bulgaria’s Mustafa Yuseinov, his second throw of 32.01m a new championship record. There was a personal best for silver medallist Milos Zaric of Serbia (31.13) and an Americas record for bronze medallist Jonas Licurgo Ferreira (30.56). 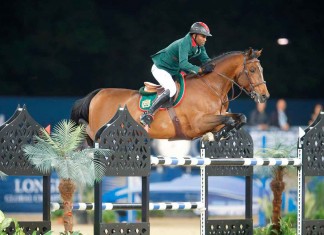 0
Morocco’s Abdelkebir Ouaddar and his impressive bay stallion Quickly de Kreisker stole the show in Doha on the opening night of the championship final...

Guintoli and van der Mark head for the last WorldSBK round...