As expected, Mutaz Barshim dominated the high jump competition with a 2.35m clearance and a pair of tantalizingly close attempts at 2.40m to highlight the opening day of the 7th Asian Indoor Athletics Championships as the Aspire Dome in Doha.

Entering the competition with an easy clearance at 2.24m, the reigning world indoor champion and Olympic bronze medallist needed two tries at both 2.31m and 2.35m before sailing clear.

But he didn’t really come alive until the bar was raised to a would-be world-leading 2.40m. He came closest with his third attempt, just grazing the bar with his calves before falling back to earth.

“Sometimes all you expect from a competition is to win, but there are also days you aim for the record. Today I focused on winning the Asian title,” said Barshim, who topped 2.36m in Mälmo, Sweden, six days ago.

“I am not setting goals prior to each meeting, to jump 2.40 or higher. I am concentrating in each attempt, taking it step by step.”

Another of the evening’s standout performances came in the women’s pole vault where it was China’s Li Ling who dominated.

After winning the competition at 4.40m, she added first attempt clearances at 4.50m, 4.60m and 4.70m to add 19cm to her own Asian indoor record set in Xianlin one year ago. It was also an outright career best performance for the 26-year-old, who arrived in Doha with a 4.66m personal best, also set last year.

“I was ready to jump 4.80, but even 4.70, a new absolute area record, is a very satisfying result,” said the lanky 1.85m-tall Li, a finalist at the world championships in Beijing last year.

“It was only my first competition indoors this year and I hope I will jump higher in Portland when it matters most. I am confident I can do better than that. I don’t only want to be the tallest pole vaulter, but also the best.”

There was a surprise in the men’s 60 metres, where Hassan Hossein Tatian pulled away from the field to prevail in 6.56, a championships record, to lead a 1-2 sweep for Iran.

“I am so excited I have never ran faster before,” said the 22-year-old who won the Asian junior 100 metres title in 2012. Here he improved his career best by 0.09 seconds, a important step, he said, towards his goal to reach the Olympic final later this year.

In the women’s race Viktoriya Zyabkina of Kazakhstan overcame a sluggish start to win handily in 7.27, well clear of China’s Yuan Qiqi (7.33).

“My start is always sluggish, but today I didn’t pay the price as I managed to catch my opponents and beat them,” Zyabkina said. “If I improve my start I can run 7.05.”

Mayookha Johny controlled the long jump competition from the outset, with a 6.35m leap, an effort that propelled her to India’s first Asian indoor title in the event. Bui Thi Thu Thao of Vietnam took silver with a 6.30m best, with Olga Rypakova finishing third for Kazakhstan. Rypakova returns to action on Saturday in her main event, the triple jump.

Elsewhere, Betlhem Desa Betlhem of United Arab Emirates blew by Tigist Gashaw Belay with 100 metres to go to prevail in a tactical 1500m contest, besting the Bahraini by more than half a second in 4:21.65 to claim the first medal ever at these championships for the UAE.

Geng Shuang led a 1-2 finish for China in the women’s shot put with an 18.06m effort, more than half a metre better than Guo Tianqian.

The morning’s opening round action included an Asian 400m record by Oluwakemi Adekoya of Bahrain. In a solo effort, the 23-year-old clocked 51.68 to break the previous mark of 52.27 set by Yajun Li of China in 1996. 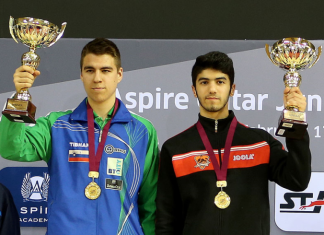 Good race pace for Simeon – Simon hopes for turnaround in...