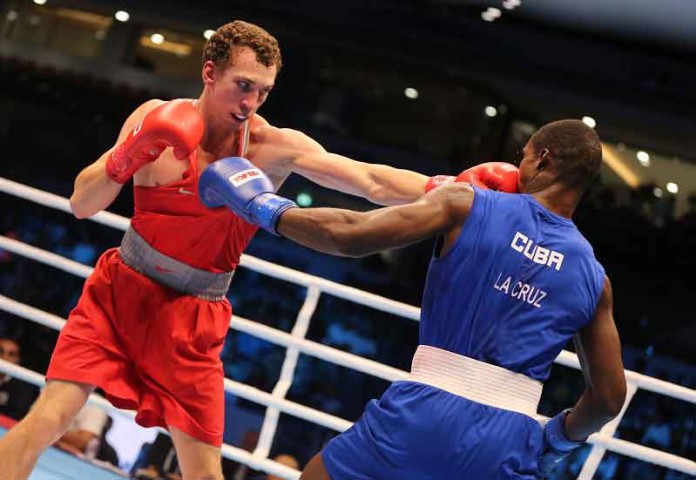 DOHA, 12 OCTOBER 2015:  On the second and final day of semi-finals at the Doha 2015 AIBA World Boxing Championships in Qatar another twenty high octane bouts entertained the crowds from around at the Ali Bin Hamad Al Attiyah Arena in their bid for glory and a chance of a World Championship title.

Much to the delight of Yousuf Ali Al Kazim, President of the Qatar Boxing Federation and Executive Director of the Local Organizing Committee in association of Qatar Olympic Comittee, once again the Ali Bin Hamad Al Attiyah Arena rose to the occasion of hosting a World Championship. 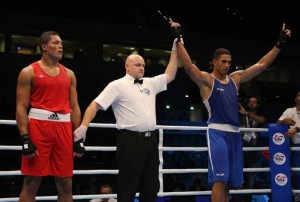 “I am proud and humble when I look over the arena on this special night as Qatar celebrates the privilege of hosting the AIBA World Boxing Championships. Literally thousands are here from all nations to witness the skill and passion of these world-class athletes live while millions tune in from all corners of the global. Qatar is firmly in the sporting spotlight and we believe we’ve offered the perfect stage to let the boxers excel while also grow this noble sport in Qatar and the region.”

Boxers from twelve different nations worldwide spreading from Brazil in the West to China in the East were in action, showing the truly global nature of the sport, with regional interests now focused purely on Mohamed Flissi from Algeria (Fly weight 52 kg) and Moroccan Mohammed Rabii (Welter weight 69 kg).

Before the tournament Flissi were among the clear-cut favorites for the gold medal, having narrowly missed out in the last World Championships in 2013. Aiming for one better in Doha, he had to overcome Azerbaijan’s Elvin Mamishzada to reach the final, but after just one round the Algerian’s dream ended abruptly after being defeated on technical knockout.

“I am very sorry, I feel like I have let myself and my fans down. My opponent had a slightly different weight than me – he  is 52 kilograms, and I’m just 49 –  so my tactics didn’t work as well as I’d hoped. I will now focus on getting the bronze medal for my country,” Flissi said.

For Mohammed Rabii however, it ended well after facing China’s Wei Liu in the welterweight semi-final. The emphatic 3:0 win means that the Moroccan is the only Arab boxer in the final here at the World Championships.

Speaking after booking his coveted spot in the final, an overjoyed Rabii said:

“I am extremely happy to be in the final and to be the only Arab left in the Championships. I am confident, I had an interview with the media today and said I was going to win and I did, I have qualified for the Olympics and I know what I need to do now in the final to win.”

Elsewhere a further three boxers from Cuba took to the ring aiming to emulate the successes of their countrymen after three Cuban teammates booked themselves into a place in the final yesterday. The sole upset yesterday for the Cuban team was Yasniel Toledo the world ranked number one in the weight losing out to Vitaly Dunaytsev the current European Confederation champion.

First up was the exciting Cuban favourite Lazaro Alvarez. Crowds went wild as they greeted the reigning world champion into the arena. The lightweight pugilist is the one to beat in this competition, and he was up against the young and upcoming Elnur Abduraimov from Uzbekistan.

Despite a promising start for the Uzbek, Alvarez had little trouble progressing to the final and now finds himself one bout away from yet another world title inside the last four years.

“It is important for me to qualify for the Olympic Games, but I don’t want to focus on that right now.  My focus is on winning gold here. I have to thank the fans though, they are amazing here in Doha, and as a team it’s important to have their backs as we compete in the ring,” Alvarez said.

It was a bout that the Kazakh contingent in the stands had been nervously waiting for, but their hero did not disappoint and advanced to the final with ease, winning on unanimous decision.

“I am happy to live up to the expectations of my coaches, my friends and family. I am the reigning champion so I had to come here and defend my title and this is always difficult in this tough competition. I am looking forward to the final and feel I am in good form.”

Julio La Cruz was the last Cuban to compete this evening, coming up against Russia’s hard-hitting Pavel Silyagin. La Cruz has won the past two AIBA World Championships in spectacular style, and the Cuban team captain earned a quota for the Rio 2016 Olympic Games through his World Series of Boxing success. Although reigning champ La Cruz has already sealed his place in next year’s Olympic Games, that will not take anything away from him going for his third consecutive gold medal here in Doha.

Silyagin came out swinging from his red corner, forcing La Cruz in the defensive mode early on, but in the end the Cuban favorite was simply too good, and the bout ended in a unanimous win for the serial gold medal collector.

“I am happy to be through to the final, my goal is to win the World Championship three times which is why I keep putting three fingers up at the end of my fights. It is important for me to retain my title,” La Cruz said before commenting on his roaring celebration with the Cuba fans in the stands: “I spent some time after the bout with the fans to show them my appreciation for the support they give me in the ring. I really appreciate it!”

The last bout of the night saw Britain’s only remaining boxer in Doha, the super heavyweight veteran Joseph Joyce, who came up against the tall and charismatic 22 year old Frenchman Tony Yoka.

Ever since winning the Europa Games in Baku earlier this year, it has been Joyce’s dream to win the world title. But here in Doha he met a brick wall in the Frenchman, who seemed the more agile of the two super heavyweights, and won on a unanimous decision.

“I went in there with a game plan, to stop his jab and work him to the body, I thought I was winning the first couple of rounds, I caught him a few times and made him wobble, I thought I had done enough. I need to get back to the UK, get in the gym and get stronger, fitter and faster for next year,” Joyce said.

For the Yoka, however, a place in the final awaits:

“It was a very tough fight, I know him well and he has beaten me before, I said if I end up facing him in these championships I would win and I did that today. Joe was third favourite, the Russian was number two, but I am going to show everyone that I will be number one.”

Tuesday will be a rest day for the boxers as they prepare to go into the Championship Finals on the 14th and 15th October which promises to serve up some wonderful nights of world-class boxing. Finals starting from 7pm.

Great start of the new season of Qatar Superbike Championship

0
The start of the new season of Qatar Superbike Championship kicked off today under the floodlights of the Losail International Circuit with the participation...

Nicky Hayden to be inducted MotoGP™ Legend in Valencia