Doha, Qatar: With just one day to go until the Doha 2015 IPC Athletics World Championships, the ‘My Incredible Story’ film series has come to a fitting finale as it turns its focus to the future and the captivating story of popular young local hero, Ghanim al Muftah, who is already playing a significant role in changing perceptions in the host nation.

13 year old Ghanim, who has one of the rarest conditions in the world, has called on everyone to get their tickets to support the largest para-sport event ever to come to the Middle East and see the incredible abilities of the world’s best para-athletes. The World Championships will take place at Qatar Sports Club from 21-31 October and tickets are on sale at https://doha2015.q-tickets.com and in Qatar Olympic Committee booths in Villagio, City Centre and Landmark malls. All proceeds of ticket sales will be donated to charity.

Speaking in his film, Ghanim said:

“The 2015 IPC Athletics World Championships will see 1,400 athletes compete in Doha. It is an opportunity for us to compete and to show the world that disability does not mean surrender. Hosting the Doha 2015 IPC Athletics World Championships in Doha indicates how committed Qatar is to people with disabilities and it is a great sign of support for us.”

The Doha 2015 Organising Committee launched the My Incredible Story series to showcase the obstacles, challenges and journeys of inspirational individuals from around the world in order to raise awareness about para-sport and people with a disability, helping to break down barriers and change perceptions. The first four films focussed on para-athletics heroes, Terezinha Guilhermina, Jarryd Wallace, Giusy Versace and Thuraya al Zaabi, who have all defied limitations and achieved incredible feats in different ways. 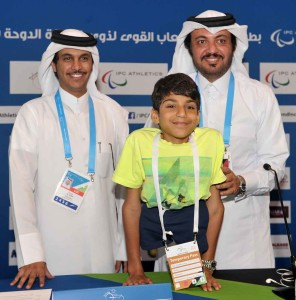 The final film looks at the incredible accomplishments that Ghanim has already achieved at such a young age and his hopes to become a future Paralympian. Despite suffering from Caudal Regression Syndrome, a rare disorder which impairs the development of the lower spine, Ghanim has set up his own charities, his own sports club and has founded his own ice cream shop. Earlier this year he won a Youth Award at the Arab Social Media Summit award for the popularity of his Instagram account, which he uses to tell his story to the world.

“Through my Instagram account, where I have almost 1 million followers, I want to say that everyone has a right to dream and has ambitions that they can achieve.  Social media is a window to the world. It helps us get our message out there faster and we have to use it in a positive and useful way. I want people to understand that people with disabilities are capable of giving and are active in society.”

Ghanim’s film was today unveiled to the international media by the CEO of the Organising Committee, Ameer al Mulla. At the same time it was announced that Ghanim would be a Youth Ambassador for the World Championships, helping to spread awareness about the event and the incredible athletes competing, and further engage the Qatari youth in para-sport.

“Ghanim is an incredible young boy and he is the embodiment of hope, determination and giving. He is just 13 years old, yet he is already changing perceptions of disability in our country. He has achieved a huge amount in his young years and he is a fantastic role model for young Qataris. We are so pleased to have his support for the IPC Athletics World Championships.”

Following the launch of his film, Ghanim watched Terezinha Guilhermina, Giusy Versace and Thuraya al Zaabi putting the final touches to their training at the track next to Qatar Sports Club. The four then had a chance to meet and share their stories and experiences. All three athletes will be in action over the course of the ten day competition. You can watch Giusy in the 100m T44 on 29th October, Terezinha in the 100m T11 on 27thOctober, 200m T11 on 25th October and 400m T11 on 23rd October, and Thuraya in the shot put F33 on 28th October.

“I hope that Doha 2015 will help in discovering athletes’ personal stories. Sport is a storyteller – it helps in bringing to life the stories of special people, exceptional people, people who have not been discouraged and have managed to smile at life. I hope that my personal journey can help this cause – that it can serve as an inspiration to many people who are ashamed – but especially to women … I hope they can find the courage to love themselves, even in a new form.” 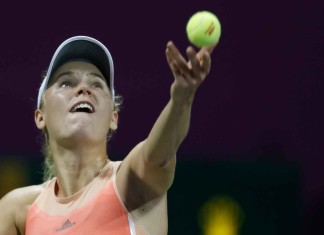 0
Q. Tough match today. How important was tonight's win in terms of the confidence, especially after a couple of early exits in the last...