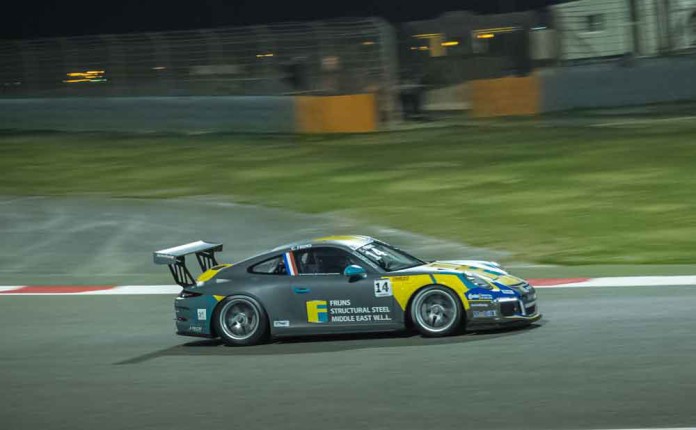 Qatar-based Charlie Frijns of team Frijns Structural Steel Middle East had a disappointing start in his bid to win Season 7 of Porsche GT3 Cup Challenge Middle East after qualifying in pole for the opening race at the Bahrain International Circuit, Sakhir.

The first encounter of the twelve race championship taking place across the Middle East between November 2015 and March 2016 was held in Bahrain as part of the prestigious FIA World Endurance Championship (WEC) final round.

An impressive grid of 15 drivers from 8 different nationalities opened the season with a mix of veterans, emerging talent and two championship debutants all taking to the track under the night sky and bright lights of Sakhir for the first of two 12-lap races over the weekend.

Right from the opening lap a new breed of youngsters shone brightest and took to the task fearlessly. Over the first lap Schmidt, Frijns and Cullen all seized control of the race having navigating the treacherous first corner before opening up a small gap on the chasing pack.

However after losing the lead from pole Charlie Frijns also lost his early promise in qualifying as the race ended early on lap two. In a fight for the lead behind Schmidt the Qatar-based driver misjudged his breaking into turn eleven before locking up and turning away from a possible collision to retire.

Speaking at the end of the race a disappointed Charlie Frijns said: “Unfortunately that is racing. You live and learn. I didn’t have the best of starts as I let my lead slip on the opening laps. I was desperate to start the season with a win and perhaps pushed a little too hard as it was my own fault that I didn’t finish the race. I won’t make the same mistake in the next race. I’m starting from sixth on the grid so the approach will definitely be different.”

Elsewhere the race didn’t get any better for team Frijns Structural Steel Middle East with Charlie Frijns’ father, Rob, languishing in 15th position. The father and son duo will be looking for a better result next time out on track as the team look to build some early season momentum.

Regarded as the purest form of racing with all drivers competing in identical fifth generation Porsche 911 GT3 Cups, the unique one-make series will consist of 12 races between November 2015 and March 2016.

Round 1 of Season 7 of the Porsche GT3 Cup Challenge Middle East takes place at Bahrain International Circuit on the 20thand 21st of November 2015. On Friday 20th the first race of the championship starts at 18:10. The second race of the opening round is scheduled for 12:00 on Saturday 21st November. 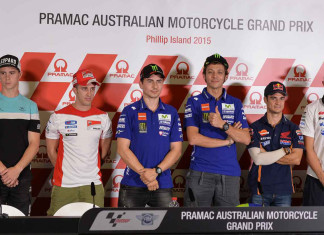 0
The Official Press Conference to kick off the Pramac Australian Motorcycle Grand Prix, round 16 of the 2015 MotoGP™ World Championship, took place on...

Qatar’s Frijns races onto podium in final round of Porsche GT3...