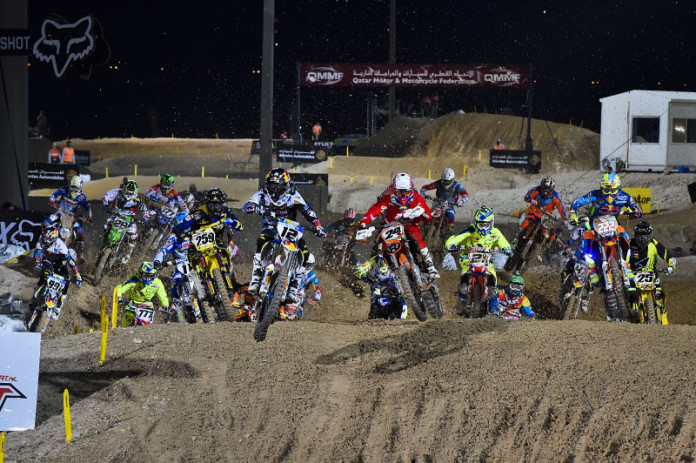 LOSAIL (Qatar), 23 February 2016 – Forget about old-fashioned charm, at least for the season opener, as the curtains on the long awaited 2016 MXGP season are set to be raised for the fourth year in succession at the circuit of Losail in Qatar this weekend. Just like previous years the race will take place on Saturday evening on a man-made circuit at the floodlit venue and all races including qualifying on Friday will be available to watch LIVE and OnDemand on www.mxgp-tv.com.

One of the best things about motocross is the fact that the track conditions constantly change. Over the last three years we have seen the soil that makes up the track in Losail pack-down, dry out and become a lot edgier. This caught a lot of riders out last year with the track being unpredictable in places and the night air adding unexpected moisture to the surface despite the incredibly dry climate. Although the track has been left more or less the same, this year we look forward to seeing if it shapes up differently again and which riders will gel with it and excel.

Over the last three years we have seen three breathtaking and unpredictable rounds of epic racing here in Losail, which has left us on the edge of our seats with a different winner each time in the premier class. Back in 2013, when MXGP first let loose on the hard packed soil of Qatar, it was Clement Desalle who was victorious. The following year Gautier Paulin rose to the occasion to claim the first red plate on offer, while last year it was well and truly dominated by Max Nagl who was completely untouchable.

This year, once again, making a prediction for the season dominator is similar to picking winning lottery numbers. It’s a gamble. With that said, the rider to mention first is of course the defending MXGP world champion, Monster Energy Yamaha Factory MXGP Team’s Romain Febvre who put together a downright spectacular rookie season last year. The young Frenchman, who recently turned twenty-four years old on December 31st, didn’t set the world on fire in his debut appearance in the MXGP class here in Losail where he went 6-7 for sixth overall, but in his defense he had spent a good chunk of the winter period injured.

This weekend ‘461’ will also be lining up fresh off of an injury. He did take to Social Media and say that he is OK and will be back on the bike in no time. Meanwhile, another hotshot lining up fresh off of an injury is the eight time FIM Motocross World Champion Antonio Cairoli who will be hungrier than ever to reclaim the title. Cairoli recently bruised some ribs but on a brighter note it has been announced that TC222 has extended his contract with Red Bull KTM Factory Racing to 2018, which only leads us to believe he is on a solid mission to surpass Stefan Everts’ tally of 10 FIM Motocross World Championship titles and become the most successful motocross rider in the world. That could all start with a solid performance at the opener this weekend at a venue where the Sicilian has never won.

And then there is Rockstar Energy Husqvarna Factory Racing’s Max Nagl who flew in completely under the radar last year and ended up being the surprise performer when he waxed everyone in both races where he completely dominated. After his performance of last year, Nagl, who remains on the same team, should be a solid bet for the win.

Another two riders worthy of mention are Team HRC’s Gautier Paulin and Evgeny Bobryshev. Paulin, in particular, has never been off the box here in Qatar over the last three years, and is looking to come out stronger than ever after spending the winter in the United States of America with arguably the highest acclaimed trainer, Aldon Baker.

Clement Desalle’s transition to Monster Energy Kawasaki Racing Team is another one to look out for. However, he had to undergo surgery a couple of weeks ago on his left arm, so he is a question mark for this weekend.

Meanwhile, Bobryshev has been showing some excellent pre-season form over the last three weeks, as has Wilvo Virus Performance KTM’s Shaun Simpson and Monster Energy Yamaha Factory MXGP Team’s Jeremy Van Horebeek; all three riders look like they could be in for a slice of podium pie.

Over in the yellow corner, the most successful rider in the history of the FIM Motocross World Championship, Stefan Everts has taken the reins at Suzuki World MXGP and has recruited to of the most seasoned riders in the class, Kevin Strijbos and the former MX2 World Champion Ben Townley. Strijbos, who goes by the name of ‘The Kid’, is one of those riders that is yet to live up to the expectation set upon him, while Townley is fresh out of retirement after having a long run of injuries which saw him temporarily hang up his boots. Both riders feel as though they have unfinished business and are out to get it done this year.

Last but not least, the young guns. Honda Gariboldi’s 2015 FIM MX2 World Champion Tim Gajser will be the youngest rider in the class as he makes his MXGP debut while Kemea Yamaha Official MX Team’s Valentin Guillod has been forced up by the age rule. Nevertheless, both riders are super flamboyant and quick on 450’s and shouldn’t have too much of an issue finding their place in the premier class. Another young gun to keep an eye on is Red Bull KTM Factory Racing’s newest recruitGlenn Coldenhoff, while Monster Energy DRT Kawasaki’s Tommy Searle is looking pretty fierce these days too.

On a duller note, we will be missing Monster Energy Kawasaki’s Jordi Tixier who has both arms injured, while 24MX Lucas Oil Honda’s Ken De Dycker broke his femur a few days ago also. We’d like to wish these two riders a full and speedy recovery.

Since the defending MX2 champion Tim Gajser has jumped up to the premier class, most bets will once again be on ‘The Bullet’ Red Bull KTM Factory Racing’s Jeffrey Herlings. Although Herlings has developed a nasty track record of getting injured, we have seen him bounce back time and time again to the blistering pace he had before each of his injuries. Judging by his pre-season form, and also the fact he is unbeaten around the circuit here in Losail, this weekend should be his to lose.

Meanwhile, his Red Bull KTM Factory Racing teammate Pauls Jonass has his heart set on going one better than the second place he got last year while Monster Energy Kawasaki’s Dylan Ferrandis, like Herlings, will be looking to get through a season injury-free with any hope of topping the box. It’s worth mentioning that Ferrandis is the only rider to beat Herlings around this Losail Circuit.

Ferrandis, Tonkov and Anstie all missed the end of the season last year, so should be extra fired up to make a point this weekend. Meanwhile Suzuki World MX2’s Jeremy Seewer started gaining some solid momentum near the end of the season in 2015 as did Kemea Yamaha Official MX Team’s Benoit Paturel and of course the American, MXGP of Mexico winner, now riding for Rockstar Energy Factory Husqvarna, Thomas Covington.

Whichever way you look at it the Losail International Circuit should prove once again to be a tough opener to the MXGP season so make sure you follow all the action starting with LIVE qualifying on Friday night. You won’t want to miss it.

Losail will also host the first round of the FIM Women’s Motocross World Championship this weekend.Yamaha MX Fonta racing’s Kiara Fontanesi, who made history claiming his 4th World title in a row in 2015, is determined to claim what it would be her first ever victory in Qatar. However, Team One One Four’s Livia Lancelot, who was last year’s winner in Qatar, will do her best to challenge the reigning champion.

All the eyes are also set on New Zealand’s sensation Courtney Duncan, Natalie Kane, who finished second in Qatar in 2014, and 2015 MXGP of Czech Republic winner’s Nancy Van De Ven. 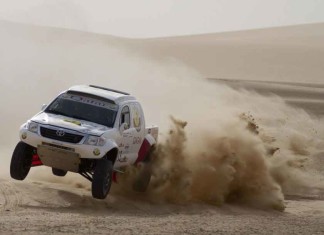 0
VILLERS-LE-BOUILLET (Belgium): Qatar’s esteemed rally driver Nasser Saleh Al-Attiyah has made a sensational return to Overdrive Racing and will drive a Toyota Hilux for...

Doha 2015 ready for first bouts as official draw is complete