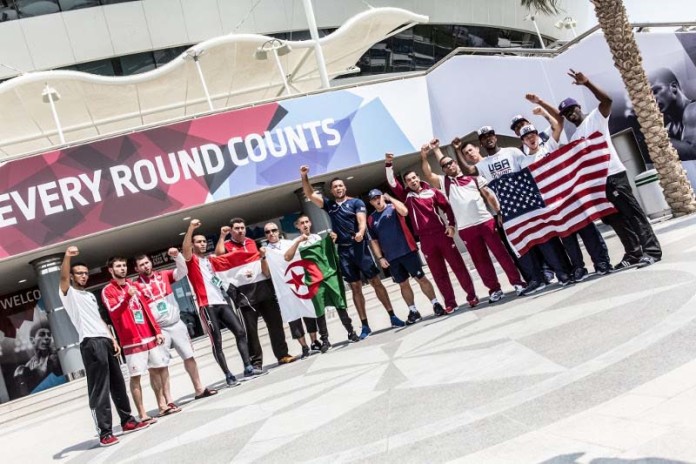 DOHA, 3 OCTOBER 2015: Several of the leading contenders for world titles got to see the state-of-the-art Ali Bin Hamad Al Attiyah Arena in Al Sadd for the first time on Saturday, the venue in which they will compete for gold medals and the ultimate prize of qualification to the Rio 2016 Olympic Games between 5-15 October. GLOBAL BOXING ELITE: Germany’s Hamza Touba (left), next to Artur Biyarslanov and his coach from Canada, Egypt’s Hussein Bakr Abdin Hosam with his father and coach, Mohammed Flissi and his coach from Algeria, super heavyweight favorite Joe Joyce from Great Britain next to his coach, Qatar’s Hzam Nabah and coach Juan Carlos Gonzalez, and Team US far right, with Nico Hernandez in the middle behind the flag.
Nico Hernandez (USA) and his teammates were impressed by the beautiful venue and training facilities. “I am here to fight and win. I am ready for my first fight on Tuesday. Everything has been done to provide optimal conditions for boxers to perform to the best of their ability”, says the bronze medalist at the American Confederation Boxing Championships in Vargas. “We arrived 3 days ago and were amazed by the venue and the state of the art training facilities which will give us the perfect conditions to box”, says Hamza Touba (GER), 52kg who won the bronze medal at the European Games in Baku this. “I came here to win and to qualify to Rio”, adds the 23 years old boxer.

One of the highlights of Doha 2015 will be the bouts in the super heavyweight category. Joe Joyce, representing Team Great Britain, is chasing his country’s first gold medal since 2007 in Doha: “To walk in here and see the sheer scale of this arena is amazing. Everything here is top-notch, all shiny and spectacular. It’s going to be great to see this place packed with people, and I hope to put on a real show. Hopefully I’ll perform to my potential, and get to leave Qatar with a gold medal in the bag.” 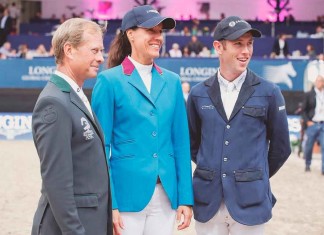 Scott, Luciana and Rolf heading for epic final in Doha with...

0
The world class line up of horse power for the high stakes Longines Global Champions Tour final in Doha next week can be revealed...

Tissot to be Official timekeeper for MotoGP™ until 2022