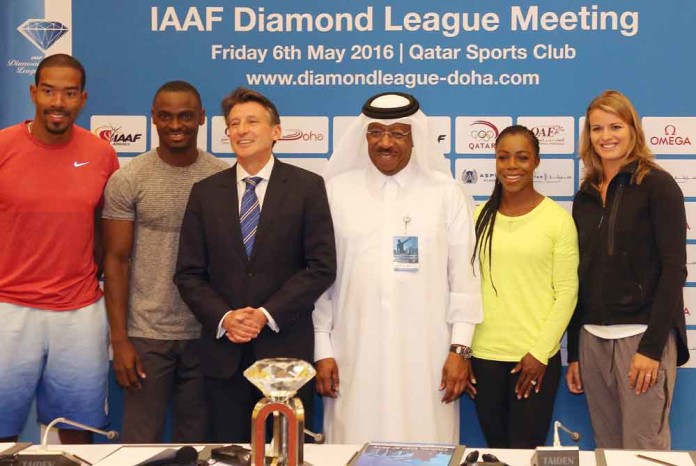 Another stellar athletics competition is expected in the Qatari capital on Friday (6) night when Doha kicks off the IAAF Diamond League series for the seventh successive year.

Eleven reigning world champions lead a field of 38 past and current global champions and 80 global medallists who will gather at the Qatar Sports Club to commence not only their Diamond League seasons but embark as well on the road to achieve their 2016 Olympic aspirations.

IAAF President Sebastian Coe noted the significance of this year’s competition during a live streamed press conference on the eve of the Doha meeting.

“Doha hosted the first ever Diamond League meeting in 2010 and has since held the honour to host the curtain raiser of the main international season,” said Coe, who ascended to the IAAF Presidency last year.

“This year that curtain-raiser holds more significance than in some years because, as the athletes know all to well, the denouement of the season is the Olympic Games.”

“We have all witnessed the way the IAAF Doha Diamond League, a prestigious event held since 2010 in Qatar, has progressed over the years,” said Qatar Athletics Federation President Dahlan Al Hamad, echoing Coe’s sentiments.

“We have set high standards in organising such an important and prestigious sporting event in previous years and we aim to continue at the highest possible level. As 2016 is an Olympic Year, with the Games in Rio, we are confident that Doha Diamond League will offer the athletes an ideal start.”

Several athletes expected to play leading roles at both Friday’s series kick-off and the Olympic Games in Rio de Janeiro also appeared at the press conference to share both their excitement and cautious optimism as their seasons commence.

Christian Taylor is a familiar face in Doha whose most recent appearance witnessed his first career 18-metre jump in arguably the finest triple jump competition of all time.

“I love competing, I love getting points, I love being on top of podiums so I try to do what I need to do to put me in that place,” said Taylor, a two-time world champion who’ll be targeting a second successive Olympic title.

“If that calls for 18 metres, that’s what I’m here to do. I’m here to compete. Qatar is very special to me because it’s the first place I went over 18 metres. It’s a blessing and curse. Now the bar is set really high.”

Dafne Schippers of the Netherlands, the 200m world champion, will be competing in Doha for the first time, an appearance she’s eagerly anticipating.

“I’ve heard that it’s a very nice track, and it’s very nice to be able to compete against these very fast women,” Schippers said. We’ll see what happens tomorrow.”

One of those fast women she’ll be lining up against in the 100m is Jamaican Veronica Campbell-Brown, a two-time Olympic 200m champion who has been among the world’s top sprinters since 2001 when she was still a teenager.

“What keeps me going is the passion I have for it,” said Campbell-Brown, who took bronze in the 200m at last year’s World Championships. “I really enjoy the feeling I get from doing well. Positivity is very important to me, and helps inspire me.”

While she’s been a regular fixture in the sprints for a decade and a half, Schippers is new to the scene, one whose spotlight she’s relishing.

“The sprints, that’s a nice new world for me,” said Schippers, who took bronze in the heptathlon at the 2013 World Championships, the year before fully shifting her focus to the sprints.

Another rising star is Qatar’s Femi Ogunode, who will be among the favourites in the men’s 200m. Last month Ogunode equaled his own Asian record in the 100m clocking 9.91, the fastest time in the world this year.

“I’m calm,” he said. “I’m not anxious about competing here, I’m in my home country. I trust in myself and believe in myself, so there is no pressure.”

The series will institute a modification to its scoring system this year, extending to six from three the number of athletes who can earn points at each meeting. Additionally, in the throws and horizontal jumps, only the top four athletes after three rounds will earn three additional attempts.

Those changes, and the addition of the Moroccan capital Rabat to the series, made ‘change’ an important theme of the press conference.

“The Diamond League has achieved a lot since it was created in March 2009,” Coe said. “It is athletics’ most lucrative circuit with prize money totaling over eight million dollars. The Diamond League is also broadcast annually to over 120 countries. It provides athletics with its most important focus outside of our major championships.”

As such, Coe said, it’s a perfect vehicle to showcase how the sport can and must continue to evolve to attract new and wider audiences.

“Athletics, which was born in antiquity, has prospered over thousands of years simply because of its ability to evolve,” Coe said.

Even though his event was impacted by the changes, Taylor said he welcomes innovation and experimentation.

“If we could bring fireworks in after every jump, that would be great,” Taylor said.

“You have to bring eyes to the stage. You have to grab people’s attention.” 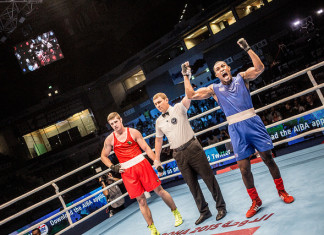 Final rounds of the season for the Losail 600 Cup and...