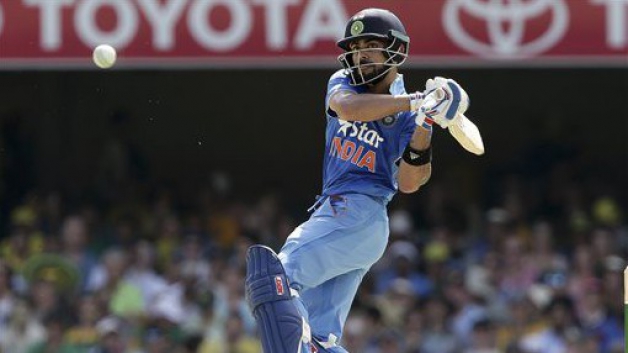 New Delhi: The sheer self-belief in his ability separates Virat Kohli from the rest and he is very much capable of breaking Sachin Tendulkar’s records with the way he has been batting, feels his childhood coach Rajkumar Sharma.

Sharma doesn’t see a weakness in Kohli’s batting, which has reached the next level with sensational performances in the World T20 and subsequent IPL.

“He is in sublime form at the moment. I don’t remember anyone playing for India being as consistent as Kohli. Even internationally, there won’t be many who have shown the consistency Kohli has shown. With the way he is batting, he is very much capable of breaking Sachin’s records,” Sharma, who watched Kohli lead RCB in the IPL final in Bengaluru on Sunday, said on Wednesday.

There has been no looking back for India’s Test captain ever since the forgettable tour of England in 2014 when he failed to make a single half century in five Tests. He soon worked on the flaws in his game and went to hammer four hundreds in the subsequent four-Test series in Australia.

Talking more about Kohli’s transformation and the ongoing phenomenal phase, Sharma said:”What separates him from the rest is the self belief in his ability. He backs his ability and the way he adapts to different conditions against different opposition is very good and it is a very important reason why he is successful. And he is always hungry for runs.”

What is Kohli doing differently compared to the time he struggled in England couple of years ago?

“England tour was a bad patch and every player goes through that phase. After that, he worked very hard on his game and the result of that you saw in Australia, the World T20 and now the IPL.

“England tour was a rough phase as I said. But it is not a Test for the future as I am very sure he would dominate the next time he is there,” reckoned Sharma.

It is known that Kohli not only spend hours batting in the nets, he devotes a substantial time towards his fitness.

“He prepares very well. Hard work everyone does but he does smart work with hard work. For example, everyone goes back to their rooms after practice but he goes back and spends an hour or two in the gym. He has strict control over his diet even though he is very much a foodie. He eats only boiled and grilled stuff along with fruits. He loves to eat. It is just that he is avoiding fats and sugar,” said Sharma.

He has also toned down his aggression with time and his coach feels it has only helped India’s batting mainstay.

“Aggression has always been his strength. The only thing is that he should not be over aggressive and cross the line. He was a bit immature earlier but now he is a matured guy, and what you seeing on the field these days is controlled aggression. He has got a very good head on his shoulders.”

Sharma closely followed Kohli’s breathtaking run in IPL where he ended up being the highest run-getter besides smashing a record four centuries.

“I was in regular touch with Virat. I even went to watch the final and got back only a couple of days ago. The hundred he made against Kings XI in the 15-over game is my personal favourite. It was unbelievable the way he played that night.”

Sharma feels Kohli is ready to captain in all three formats but he should wait as long as MS Dhoni is around.

“He has shown his leadership quality but I would say Dhoni is a tremendous captain. So let him continue till the time he wants to continue and Virat will take over when the times comes,” the coach added.

Sreesanth Wants the 13 Names in Lodha Report to be Revealed

0
New Delhi: With the Kerala High Court restoring the life ban imposed on S Sreesanth by the BCCI, the pacer has vented out his...

Positive impressions in the second day of the FIA Women Cross...