ABU DHABI (UAE) – Wednesday, March 22: The Automobile and Touring Club of the UAE have announced a massive entry for next week’s 27th Abu Dhabi Desert Challenge (ADDC) Powered by Nissan.

The event is also the opening round of the prestigious FIM Cross-Country Rallies World Championship and precedes rounds in Qatar, Chile, Argentina and Morocco.  The series is the traditional battleground between the Honda, KTM and Yamaha factory teams and has been dominated by Austrian manufacturer KTM on all but four occasions since riders were permitted for the first time in 2005.

“The Abu Dhabi Desert Challenge has traditionally been the first major FIM Cross-Country event of the season after the Dakar Rally and it’s great to see the factory teams line up alongside such a strong field of other riders,” enthused Mohammed Ben Sulayem, rally founder and President of the ATCUAE.

“The two-wheel category has strength in depth and, coupled with our quad entry, and the car section, which always attracts many of the world’s finest drivers, the scene is set for a superb 27th edition of the Abu Dhabi Desert Challenge.”

Marc Coma has the record for securing eight victories in 10 years, before retiring to take up an organisational role within the Dakar Rally hierarchy. Toby Price is the defending champion on his Red Bull KTM Factory Team 450, but the Australian crashed heavily at this year’s Dakar and broke a femur and that has opened the door for local hero, last year’s runner-up and current Dakar champion Sam Sunderland to start as the favourite to win the Abu Dhabi Desert Challenge for the first time, alongside Austrian team-mate Matthias Walkner.

The Monster Energy Honda Team is dividing its team resources between two events on opposite sides of the world. While American rider Ricky Brabec rides in this week’s four-day Sonora Rally in Mexico, Argentine Kevin Benavides and Portugal’s Paolo Gonçalves will take part in Abu Dhabi.

“It’s the first time we have competed since the Dakar and we are sorry that an injury for Joan Barreda Bort will keep him away,” said the team’s general manager Martino Bianchi. “This will be the first race back for Kevin after a hand injury and a good chance for Paolo to check his fitness levels on a demanding event like Abu Dhabi.”

There are an impressive 28 riders from 13 nations on the motorcycle entry list, including several from the UAE and seven professional riders on factory motorcycles. Top seed is the Chilean rider Pablo Quintanilla, the defending FIM Cross-Country World Championship rider, with Dubai’s Mohammed Al-Balooshi leading the Arab challenge on his Ride to Abu Dhabi Team KTM 450.

Quads were classified in their own category in 2005 and the Portuguese rider Ricardo Leal Dos Santos claimed the win on a Yamaha. In the 11 events since that date, Poland’s Rafal Sonik has won on two occasions and ties with Qatar’s Mohammed Abu Issa and Sebastien Husseini on two wins apiece. Abu Issa has now switched to racing on four wheels and Sonik tops the list of 17 quad riders, as he aims to put a disappointing Dakar Rally outing behind him. 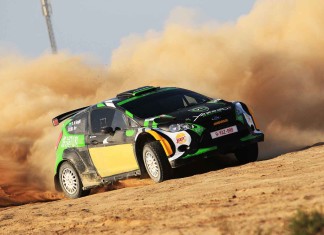 JORDAN RALLY ‘MUCH MORE THAN A SPORTING EVENT’