The opening round of the 2015/2016 Losail MX Championship kicked off today at the Losail MX Track with a participation of 39 riders.

In the MX1 category, the winner was the British rider Benjamin Menzies riding a Honda  CRF450. The defendant champion of the MX1, the KTM rider Mohamed Jaffar,  came second and the South Africa rider Michael Anderson finished in third position.

For the British rider, this was his first participation in the Losail MX Championship,  finishing second in Race 1 and first in Race 2 ‘ This is my first time in this track so I am constantly learning .  The first race was a good start and I was racing with Mohammed Jaffar and it was very difficult but I like the soil here , so as I race, I like the track more and I go faster and faster. In the second race , when when My understanding of the track became more dominant , then I was able to overtake Jaffar and go ahead.

Mohammed Jaffar was happy and proud of his result in the first race of the season, wining the first race and finishing second in the second one  ‘ It is a good start, I am very proud of my result in the first race of the season. I had two races in one weekend, just came from racing in Dubai, and it is a tiring start for me, but it is good. I finished today first in first moto then second in second moto,  so now I am second in the MX1 class and this makes me really proud because there was a good fight between me and Ben Menzies, one of the top riders in Dubai, who I always want to have challenge with him and today it happened. I want to thanks QMMF for their hospitality every time and great job and great work they are going here at the track and thanks to Red Bull, Sand Garde, MX Academy, Adidas Kuwait and the new sponsor Drag 965 and hope to keep it up in high expectations’

In the MX2 category, the victory was for Ryan Blair from Great Britain with a KTM bike and the Kuwaiti riders Meshari Abou Shaibah and Moaath Al Ansari ended in second and third place respectively.

‘I made a mistake in the race 1, I went down in the first lap in race 1 and I made it difficult for myself again but in the second race, all was good, I just took the lead , drive smooth and try not to make any mistake , and the riders Meshari and Jaffar rode really well so it was a good fight and looking forward the next race’ Blair said after race 2.

Meshari Abou Shaba was very happy with his second position in the MX2 and hopes to win in the next round.  ‘I am happy to finish third but I am looking for the next round to be better and finish first, I hope that. Today it was a difficult race, the track was very hard but happy to finish third in both moto and thanks to QMMF and Basel Motorsport in Kuwait for the support’ Moaath Al Ansari said after the moto 2.

In this season, there is a new category, Veterans, where the winner was the Emirati rider Ali Al Kubaisi and Tomi Sarivaara from Finland and Enrico Barbagli ended in second and third place respectively.

There was an official photoshooting with all the riders and QMMF President, Mr.Nasser Khalifa Al Attiyah, who was extremely happy for the start of the 2015/2016 Losail Motocross Championship ‘ We are extremely happy to start  2015-2016 Losail Motocross Championship and this is an incredible sport that we are looking to improve it year by year, we are very happy with the number of participants, also for the number of the junior category and veterans for first time’  QMMF President said. 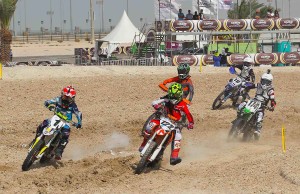 ‘We are looking for a really good organization level side to give the best of us for the teams and post them in a good way. I get a lot of feeling and good appreciation from the families that thank us how professional we are here in Qatar, amazing set up and we are looking also to increase the number of juniors more and more in the coming rounds and happy to see the young blood involved in our championship, also with some parents participating with them and that is really healthy to grow with the sport culture.’ added Al Attiyah.

‘For sure, one day we will reach our goal to see an international level of riders from our zone,  specially we are acting as zone 2, Asia, We are in a big competition but our culture need time and more support for the young riders to grow and we are here to give them support and facilities, we are very proud of them and give a continuous support and to high the level, we plan to bring expertise organizer and riders to give more motivation to the riders to improve and also involve the media side to give more coverage , to be more active with them and feel that they are more important in this zone. We are happy that last year we had 3 countries that participated in this zone  in Asia  Qatar,  Bahrain and Lebanon and for sure this year we are hoping to have more countries to be involved, as they have many races similar but they need to register in the zone until we reach to have a proper championship.’ ended Al Attiyah.

In the Junior LMX Championship, the winner was the young rider Ahmed Al Nuaimi from UAE in the 65cc and Eugenio Barbaglia from Italy won in the 85cc. 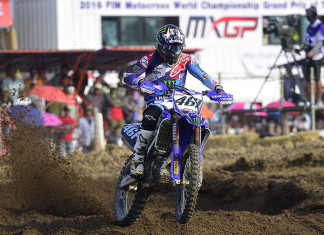 0
UPHAN BURI (Thailand), 06 March 2016 – Throttle control was the key to the race here at the second round of the FIM Motocross...

An on form Torres grabs top spot in floodlit FP1