Saturday, 11 March 2017 : Maverick Viñales was second on the first day of the #QatarTest, but the fastest man in Valencia, Sepang and Phillip Island struck back in style to top the timesheets on Day 2 – edging Movistar Yamaha teammate Valentino Rossi with a lap quicker than Andrea Dovizioso’s (Ducati Team) Friday best. The 2016 Silverstone winner did a best of 1:54.455 after 49 laps, with a much-improved Rossi 0.277 in arrears. The nine-time World Champion also crashed on Day 2; but Rider Ok.

Despite the timesheets being dominated by blue, it was Ducati’s new “aero-fairing” that stole the headlines – with a drastic new design unveiled in the latter stages of the second day on track. Dubbed the “Hammerhead” after MotoGP™ asked fans on Twitter to name the new design, it was Andrea Dovizioso charged with the first public evaluations of the innovation. The Italian put in a best of 1:55.583 on Day 2, seven tenths down on his best from Friday. His Saturday laptime was set on the ‘traditional’ fairing tested thus far and put him P13.

Teammate Jorge Lorenzo impressed on Saturday with more progress as he dropped into the low 1:55s, with a best of 1:55.344 to go to P8. The ‘Spartan’ was quick out the blocks and went on to complete 53 laps, despite suffering a small crash with no consequence. Fellow crashers on Day 2 included Cal Crutchlow (LCR Honda), Jack Miller (Estrella Galicia 0,0 Marc VDS), Danilo Petrucci (Octo Pramac Racing), Alvaro Bautista (Pull&Bear Aspar Team), Bradley Smith (Red Bull KTM Factory Racing) and the Aprilia Racing Team Gresini duo of Sam Lowes and Aleix Espargaro.

Crutchlow got in more running on Saturday after losing some track time to mechanical gremlins on Day 1, ending the session in P4 despite the incident and managing 46 laps on the second day of action. The two-time GP winner was also top Honda once again, this time with a 1:55.032.

Reigning Champion Marc Marquez (Repsol Honda Team), however, kept it clean after two falls on Friday and ended the day in P6. The Spaniard set a 1:55.196 as his best, completing 50 laps. Teammate Dani Pedrosa had a tougher day at a track he finds more of a challenge, ending up P16 with a 1:55.875. Pedrosa was P3 at the end of the Phillip Island test and will be looking to move forward on the final day of Qatar.

Jonas Folger kept his crown as top rookie, putting in another stunner to complete the top three on his Monster Yamaha Tech 3 machine. Folger was the only rider able to join the Movistar Yamahas in the 1:54 bracket, putting in an incredible 1:54.917.

Aleix Espargaro finished Day 2 completing the top five for Aprilia despite his crash, with fellow Independent Team rider Alvaro Bautista also impressing in the top ten to put his Ducati GP16 in P7. Espargaro did a 1:55.121, Bautista a 1.55.245 in a close field.

Scott Redding (Octo Pramac Racing) had a much improved second day to take ninth with a 1:55.353 on his last lap of the day, with Monster Yamaha Tech 3 rookie and reigning Moto2™ Champion Johann Zarco completing the top ten on a 1:55.354.

Andrea Iannone was the fastest Team Suzuki Ecstar rider in P12 on a mid 1:55, with teammate Alex Rins in P17. Rins tried the Suzuki “aero-fairing” for the first time on Day 2, ending the session ahead of the EG 0,0 Marc VDS pairing of Tito Rabat – returning from injury – and Jack Miller.

Red Bull KTM Factory racing trio Pol Espargaro, Bradley Smith and test rider Mika Kallio got through another big program of work for the Austrian factory on Day 2, with Espargaro the fastest ‘Bull’ on a 1:56.648.

The third and final day of preseason testing kicks off on Sunday at Losail International Circuit, before the venue then prepares for the first Grand Prix of the season – with the lights going out on the 23rd March. 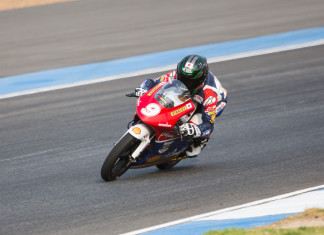 Everything is ready for the Shell Advance Talent Cup young riders...

0
The preparation for the young competitors begins on Wednesday, the schedule is Qatar changed slightly and spread over four days. here will first be a...