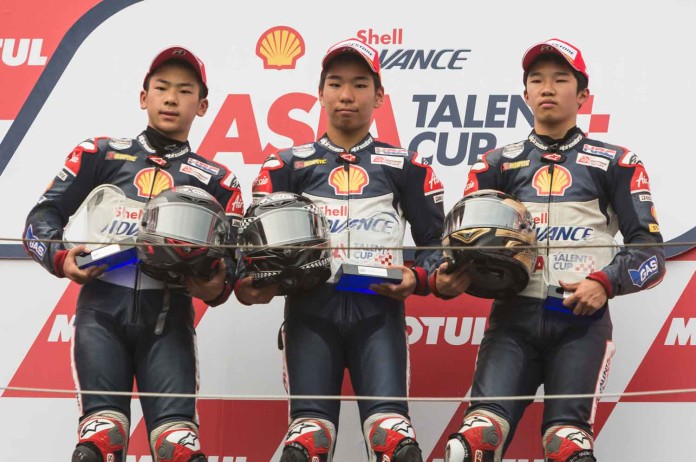 Kazuki Masaki was the winner of the second Shell Advance Asia Talent Cup race held at the Twin Ring Motegi circuit, but the star of the day was Ayumu Sasaki. The Japanese rider was second and thus mathematically cannot be beaten, lifting the title with two races to spare.

The initial star of the race was Indonesian Andi Izdihar. With the race run in wet conditions, Izdihar took the lead from the start and set a pace over a second a lap faster than his rivals, dominating without pressure. The pressure was within the chasing pack involving Masaki, Sasaki and Kunimine. Sasaki needed to overcome Kunimine by seven points to clinch the title in Motegi, otherwise he would have to wait for the final two races in Sepang.

This battling trio performed the highlights of the race with continuous attacks and changes of position, fans wondering who would take to the podium in the intense battle. Sasaki’s strategy seemed to work, leaving the racing line to cool his tyres in the standing water and saving performance for the final laps.

The first major event came with five laps to go. Izdihar, six seconds ahead, fell at the final corner and while he was able to remount, his chances to win were lost. The chasing trio were suddenly battling for victory, and a championship. Kunimine revealed his cards and tried to escape, but it was an impossible mission as Masaki and Sasaki reacted immediately. It would be decided on the last lap, a desperate attempt saw Kunimine fall,  at the final corner Sasaki himself almost fell which granted the victory to Masaki with Sasaki second and Date, who made an excellent comeback, third.

Ayumu Sasaki, who turned 15 last week (4/10/2000) has had a fantastic season, claiming three wins and five podium finishes in the ten races held so far.

Alberto Puig, Director of the Shell Advance Asia Talent Cup: : “Difficult conditions today. Wet but not 100% so, finally we decided to go with wet tyres, even if there was a small dry line, but it was better, especially at the beginning. In any case we had a good battle, it was a pity that Andi crashed, because he was riding very well, also was a pity that Kunimine crashed in the last lap, but he did a fantastic race. Great race also for Date and Ogura in the last laps. We preferred to have a dry race, to improve the lap times from yesterday, but it was not possible, and now we go to Malaysia, were we expect to have even better battles.”

“About Sasaki, last year he was one of the top riders, and this year he made a good year, very consistent, he made not so many mistakes. He had a big chance to win the title, overall he made many great races because he ride also the Rookies Cup in Europe.”

The next round of the Shell Advance Asia Talent Cup will take place from the 23rd to 25th of October at the Sepang International Circuit, where the last two races of the 2015 season will run alongside the MotoGP™ World Championship.

Before this round the selection event for the 2016 Cup riders will take place. 126 candidates are scheduled to participate in the selection tests from the 21st to 22nd of October. 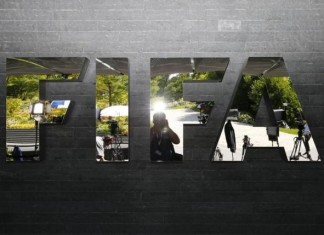 0
Soccer world governing body FIFA was due half of the advertising revenue from a 2005 media deal it signed with a Caribbean soccer organization...