The world class line up of horse power for the high stakes Longines Global Champions Tour final in Doha next week can be revealed today.

World No1, Tour reigning champion and current ranking leader Scott Brash (GBR) is aiming to make history with an extraordinary third consecutive title in next Saturday’s Grand Prix at the stunning AL SHAQAB venue in Qatar. Scott will be bringing his Olympic champion horse Hello Sanctos to the 15th and final event of the 2015 season.

Scott has a two-point advantage over Luciana Diniz (POR) who will arrive in Doha with her Grand Prix-winning horses Winningmood and Fit For Fun as the championship race comes down to the wire after one of the most sensational seasons in the Tour’s 10-year history.

With the battle for the overall crown on a knife edge, Rolf-Göran Bengtsson (SWE) is the only other rider who can take the title in Doha where he will be riding the extraordinary Casall ASK. Rolf will be looking to keep up the momentum of his recent emphatic Grand Prix wins in London and Rome in what promises to be a nail-biting finale.

The stars of showjumping will come together for a three-day feast of top-level sport at the spectacular state-of-the-art AL SHAQAB equestrian facility from the 12-14th November. As excitement mounts, the prized equine athletes will be leaving Europe this weekend on specially commissioned flights with comfortable stalls before heading to the high quality stabling at AL SHAQAB, a member of Qatar Foundation.

There will be fascinating battles up and down the ranking leaderboard and especially among the other riders who have made it into the Top 10 overall this season. With a Grand Prix prize fund of €450,000 and a bonus Championship prize fund of €1 million to be shared among the top 18 finishers in this year’s series, the competition on Grand Prix day will be fierce as riders jostle for final positions.

Fourth to eighth place riders Simon Delestre (FRA), Christian Ahlmann (GER), Sheikh Ali Bin Khalid Al Thani (QAT), John Whitaker (GBR) and Pénélope Leprevost (FRA) will all be in the mix and fired up to achieve their final positioning – all of which could upset the balance of the top three and the final result. With Qlassic Bois Margot, Taloubet Z, First Devision and Flora de Mariposa just some of the horses who will be in action next weekend, it’s set to be an exciting three days of high calibre competition.

Home riders Sheikh Ali Bin Khalid Al Thani (QAT) and Bassem Hassan Mohammed (QAT) will be looking to continue their strong form this year and will no doubt be boosted by the support of local fans. Chantilly Grand Prix winner, Gregory Wathelet (BEL), Valkenswaard Grand Prix winner, Marco Kutscher (GER) and Paris Grand Prix winner, Bertram Allen (IRL) will be hoping for a repeat of their earlier success this year, and look to be in a strong position to shake up the final ranking.

Will Scott make show jumping history? Will Luciana take her first ever LGCT championship title? Can Rolf-Göran make it third time lucky to finally bring home the prestigious LGCT crown? The stage is set for one of the most exciting sporting finales of the year. 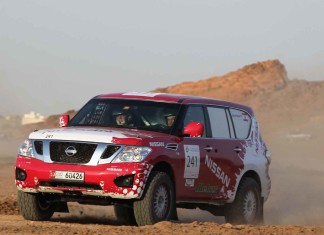