DOHA, 9 OCTOBER 2015: After the mania caused by Filipino boxing sensation Manny Pacquaio across the capital yesterday, the scene was set for another explosive day of elite boxing at the world-class Ali Bin Hamad Al Attiyah Arena.

Despite Pacquaio leaving Qatar late last night the prospect of a swift return to Doha for a comeback bout against challenger Amir Khan was heighted further with Khan landing into Qatar today. Khan, the current holder of the WBC Silver welterweight title and a former British silver medalist at the Athens 2004 Olympic Games is expected to witness for himself the global showpiece in Doha from tomorrow.

“Stage by stage the standard and entertainment keeps on increasing and the class of the boxers is really starting to show. This is when we start to see the real world championship contenders emerge. To see boxing of this skill and quality live in the heart of Doha all within this state-of-the-art facility really is a spectacle to behold. We’re thrilled that so many within the community of Qatar have turned out in force to support the event and join fans from around the world in this celebration of sport. I’ve no doubt boxing has a very bright future in Qatar and this event will leave a lasting legacy on future generation. We couldn’t be happier with how things are going especially with stars like Manny Pacquaio attending yesterday and now Amir Khan confirmed to share the championship experience tomorrow.”

With interest for boxing booming across the country, local communities once again came out in numbers for the last day of the preliminaries. In one of the early bouts in the afternoon session, Cuba’s reigning world lightweight champion, Lazaro Alavarez, took on Thai champion Pachanya Longchin.

Backed by vociferous support from the stands, Alvarez had no trouble living up to the favorite tag and booked his place in the quarter-finals. Speaking after winning on unanimous decision, the Cuban favorite said:

“I’m happy to through to the next round. It was a tough fight against a very skilled opponent. I’ve come to Doha to defend my title, and I feel confident that I’ll succeed.”

Another reigning world champion in the ring today was Kazakhstan’s welterweight pugilist Daniyar Yeleussinov, who easily defeated Pavel Kastramin from Belarus. Winning 3:0 on points, the Kazakh favorite is racing towards his second consecutive world-title:

“It feels great to win my first bout, but I know that I’ll be facing far tougher opposition in the coming rounds. I just need to get my head down and work even harder. There’s no other way,” Yeleussinov said.

For the Philippines, meanwhile, Eumir Marcial went up against stiff competition in the name of Youba Sissokho Ndiaye from Spain. The 19-year-old junior world welterweight champion, making only his second senior appearance in the World Championships, looked inspired in the ring after meeting his idol Manny Pacquaio yesterday.

“It was amazing to meet Manny. He said that I should go out there and dominate my opponent so that the judges can see my aggression. I think the bout went well, and I’m thrilled to be through to the quarter-finals. I think I’ll be up against the world no. 1 in the next round, so it’ll be really hard to stay in the competition, but I’ll do my best to get to the final.”

For Qatar’s Hakan Murst Nuraydin the competition is over after being defeated by Mikhail Dauhaliavets of Belarus on unanimous decision, bringing an end to the incredible journey for the light heavyweight boxer which has catapulted him from the local gym to the world stage on home soil.

“I did my best, but it was hard as my opponent had an extra day’s rest. My legs were tired and I had to focus to stay in the three rounds. Right now I’m of course very disappointed, but I thank the Qatar Boxing Federation for this wonderful opportunity of competing in the World Championships at home in front of friends and family.”

Team Great Britain had five boxers in action today. In the first evening session, the aptly named Mohamed Ali overcame Italy’s flyweight hot-shot Vincenzo Picardi in what was an intense and tightly contested affair. The crowd seemed to enjoy the battle, something Ali appreciates:

“It’s the way I fight that gets people off their seats. It was the same in Azerbaijan [European Games 2015], and I really like it when people get behind me. My opponent knocked me out last time we met, so it was good to get revenge.”

Despite Ali’s heroics, all eyes were on fellow Brit and super heavyweight favorite Joseph Joyce, gold medalist from the European Games in Baku and current EUBC no.1. He was drawn against Morocco’s burly Mohammed Arjaoui who has represented his country in the Olympics in Beijing 2008 and London 2012. It was the most anticipated bout of the day as supporters from each country sat ringside to offer their support.

In the end, the British contingent could celebrate as Joyce recorded a win on unanimous decision. Speaking after the win, Joyce said:

“It was a good start to get me all warmed up and ready for the next round in the competition. It’s such a great setup here in Doha, they’ve got the music pumping and all the screens flashing, it’s incredible. Although my focus was on my opponent during the bout, I really appreciated all the fans coming out to support me. I can’t wait to be in the ring again!”

Joyce’s teammate, the No.3 ranked EUBC light heavyweight boxer Joshua Buatsi, faced an immense challenge in the name of Julio La Cruz from Cuba – incidentally the third reigning world champion in the ring today. Despite a promising opening round, the bout ended in predictable fashion with La Cruz winning on unanimous decision. The defeat means that four out of five Brits are ready for the quarter-final stage.

Mohammed Flissi, favorite to be crowned world champion in the flyweight category here in Doha, was in his characteristically playful mood in the ring against Armenia’s Koryun Soghomonyan. The Algerian danced around his opponent throughout the one-sided bout, and remains on track for glory after winning on unanimous decision.

“I’m the only Algerian left in the competition, so it’s a big responsibility for me. I know that my competitors are really strong, but I think I’m the best in my weight category. God willing, I can be champion,” Flissi said.

The latter stages of the marquee event is set to kick off tomorrow with the first quarter-finals. 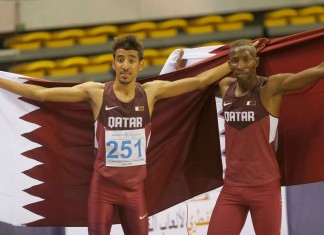 0
DOHA:  Qatari runners displayed a stunning performance on track on the final day to give their team triumph at the 7th Asian Indoor Athletics...