The course is ready, competitors are flying in, and battle lines have been drawn for the Middle East’s first-ever UCI Road World Championships.

In just four days, nearly 1,600 riders from over 80 countries will descend on Doha to try and earn bragging rights for an entire year.

Union Cycliste Internationale (UCI) President Brian Cookson is eagerly looking forward to the start of the festival of cycling in Doha. “From our earlier experiences of the annual Tour of Qatar, we know that the competition in Doha is going to be quite strong. The wind is likely to play a major role in the outcome of each race. I’m absolutely certain about seeing some highly exciting races.”

“Doha’s organisational skills are well known and I feel they will set new benchmarks for future hosts. I simply cannot wait for the UCI Road World Championships Doha 2016 to begin,” added the top official.

Cookson, who served as president of British Cycling from 1996 to 2013 before taking charge of the world body, was impressed with the level of interest cycling has generated in the region. “Over the last two years, cycling has made quite an impact in the Gulf. I am not just talking about governments, but also spectators. That is amazing,” he said.

Cookson had no hesitation in spelling out the races he was looking forward to in Doha. “The elite races for men and women are the UCI Road World Championships’ blue ribbon events. They will undoubtedly be the most exciting events in Doha.

“In our sport, there is an old saying that ‘it is the riders who make the race.’ In Doha too, they will decide how hard to go, whether to force the pace into the wind, how to tackle crosswinds and so on. These races are not going to be a walk in the park. Cyclists will have to fight hard for victory.”

Cookson, a former rider who tried his hand at road racing, track, cyclo-cross and mountain bike, believed that the Doha conditions will make the races difficult: “You don’t need a tall mountain to organise a hard race. The wind, heat, terrain and twisting nature of the Pearl-Qatar circuit will make the races quite interesting,” he added.

Cookson felt that the traditionally European sport was gradually making inroads into other parts of the world. “We are keen to take cycling to new areas of the world. More and more tour events are now being organised in the GCC. Next year, the Tour of Qatar will be raced as a UCI WorldTour event.”

Cookson said he was proud about how the sport had grown in the public sphere in recent years. “We’ve witnessed a tremendous change in fortunes for our sport in the last two decades. I come from the UK where cycling activity used to be moderate. But all that has changed now. More people than ever are riding bicycles on a daily basis. The same is the case with Switzerland, where I’m currently based.

“People have woken up to the health benefits of cycling. Riding a bicycle to work helps cut your spending on fuel. People are wholeheartedly embracing the new culture of healthy living,” he said. 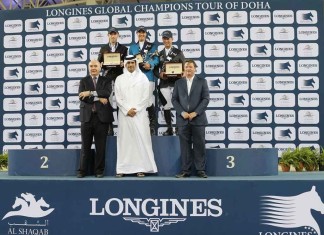 0
Luciana Diniz and Fit For Fun took the 2015 Championship tonight after winning the final Longines Global Champions Tour Grand Prix of the season...