You remember the Friendship Cup of 20 years ago played in Canada, where Sourav Ganguly ran in with something akin to coins jingling in his pocket while bowling lovely outswingers, and where Inzy chased a nasty NRI over the fence with a bat for calling him a potato? Such utterly pointless trivia was deliciously lapped up in 1997 when promoters had just began milking the India-Pakistan cricket rivalry for outrageous commercial profits. There was sport to be seen and hollered over of course and fun to be had and money to be made. But there was also a saleable rivalry for rivalry’s sake that could form the rostrum for the adjoining revelry.

It’s safe to say badminton in India is at that juncture, where the Premier Badminton League can dip into the year’s grandest rivalry – Spain’s Carolina Marin vs India’s PV Sindhu – and piggyback the rest of the undercards on this highly watchable contest. The colourful caravan can then travel to different cities for everyone’s general merriment, though starchy vegetable names might not get thrown at anyone playing this extremely fit sport.

PBL promoter Atul Pandey reckons badminton is 20 years behind cricket as a commercial property. But owing to its success – back to back Olympic medals, consistent headlines on the circuit and some likeable icons, besides the athletic frenzy of the game itself – shuttle’s growth rates are comparable to what cricket was mid-to-late-90s. He insists badminton equipment outsells most other sports on online portals, and besides the record viewership at Olympics, first Saina Nehwal and now PV Sindhu have ensured it’s a good Tier 2 sport for sponsors, in a clutter-breaking way of saying.

So even as it gets unofficially called India’s No 2 sport after cricket, it’ll be naïve to think that Sindhu and Marin didn’t send the ratings through the roof this August. It’s the closest India was coming to gold in 8 years since Bindra – Vijay Kumar’s was a sleeper hit silver – and the buzz reached a crescendo when Marin and the Indian upstart played out one of the more entertaining finals of Olympics women’s singles of many editions. So, PBL cannot be faulted for soaking itself in this battle, though with some friendly quirks thrown in because it’s halfway exhibition, halfway competing. 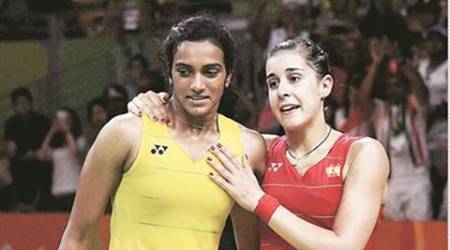 So, Marin will turn out for Hyderabad Hunters (her coach Fernando Rivas in tow), Sindhu will continue with Chennai Smashers, and the two giggled away at a pre-event presser, token-promising fireworks on Sunday but sounding equally tentative about the 11-point format.

Indians should’ve seen it coming – the Sindhu storm – last PBL, when she won all her matches. It would take another six months for her to explode on the biggest stage, and it was the most exuberant badminton face-off of Rio – and will remain that now that Lee Chong Wei and Lin Dan are tapering off.

However, all past history can be erased at the PBL with the new 11×3 format morphing this into a highly unpredictable contest. “I think Sindhu has come up very fast. She is a good player. Whenever I play against her, it’s always a tough match,” Marin told the media, hoping Sindhu’s hometown wouldn’t mind switching loyalties for the fortnight. Highly unlikely, though the crowd will be treated to a nice little skirmish. Marin won Rio, Sindhu won in Dubai, and the 11-point format that suits fast, attacking aggressive players more than defensive ones means the league will hit the ground running (and shrieking).

“There would not be much time to think in the 11-point game format. So, every point is important. Every team is equally tough. So, it depends on who plays better on that day,” Sindhu said. Not even ‘that day’, more like who plays better those 20-30 minutes of one quickie match.

That should leave Mumbai Blasters wondering given they have Sung Ji Hyun, one of the better long-form shuttlers in the world. But her recent surge towards attack will add to the ties, as will Cheung Ngan Yi who’ll play for Bengaluru Blasters. Expect to see more of India’s second string though – Ruthvika Gadde for Bangalore and Rituparna Das for Awadhe Warriors.

Windy halls will wreck havoc. Matches will be tough to call (and not strictly reflections of how good the player is), there’ll be upsets galore, shuttles will be kept low till the kill shot fetches up and the first 4-6 points will seal deals. If it gets to the 8-all situations in an 11-pointer, it’ll be about nerves.

There’s ordinarily no nerves when you think Saina Nehwal, but much has changed in the last six months. For the first time in a decade, an entire tournament in India’s not riding on her shoulders, but if there’s one match to rival Marin vs Sindhu – perhaps even more emotive – it will be Saina vs Sindhu. “She’s fit and has had three good weeks of training,” says Awadhe coach Anup Sridhar, while issuing a reminder of what most Indians have forgotten: Saina Nehwal was the original. “The pressure will be on opponents to beat her. She’s coming off a long lay-off, and will play freely. Her calibre ensures she can do that and she’ll be very hard to beat because of her decade long experience.”

“She’s looking very determined,” he adds for good measure, though logic demands that she’d have liked more of match-practice since surgery before running into Sindhu or Marin. “Players don’t forget or forgive,” he laughs, adding, “She won’t have forgotten the All England or World Championship finals she lost to Carolina. And every little bit helps psychologically.” The little bit here is the 11-point grazes, which could go either way. Fitness permitting, Sindhu vs Saina can turn out better than the opening Sindhu vs Carolina, though fans of the original wouldn’t mind a Saina bt Carolina, while we’re at it. 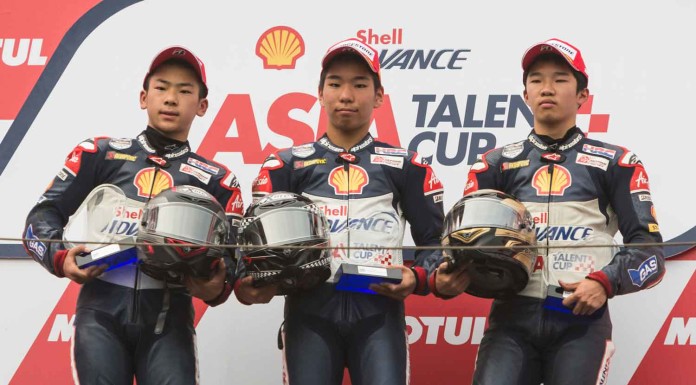