These four words have been hurled at Vikas Krishan so frequently that he started suffering nervous breakdowns. The anxiety generally creeps in three, four hours before a bout and gradually builds into frustration so strong that he would not be able to focus in the ring. “From the last two years, since I lost at the Rio Olympics, I feel a lot of pressure going into the ring because whenever I do not win, they ask me, ‘how can you lose’?” Krishan says.

Everyone, he adds, questions him – from his 90-year-old grandfather to five-year-old son, and everyone in between. He’s relieved he won’t hear those four words on Saturday. The 26-year-old defeated Cameroon’s Wilfried Diudonne 5-0 in a bout that at times resembled a brawl to win the gold medal in the 75kg category.

Like most boxing match-ups, the scoreline barely reflects how close the final was. Even Krishan conceded that he felt he had lost the second round to the quick-fisted Cameroonian but Krishan’s experience, counter-punches and the powerful left hooks saw him through. The unanimous verdict, though, was sniggered at.

But Krishan does not want to talk about the win that makes him the only boxer from the country to have won gold medals at the Asian as well as Commonwealth Games. Instead, he chooses to vent about the burden of expectations, the pressure of a role model and the fear of losing.

Set to turn pro: The feeling is so strong that he now wants to quit amateur boxing and turn pro, a point he hopes to discuss with the Boxing Federation of India when he returns later this week. “Since a professional boxer can also compete at the Olympics, I want to give it a shot. It will be something new for me after all these years in amateur boxing,” Krishan says. “It is also because I feel pressure from the public. I am the most senior player in the ring… and a role model for the students. So many players and coaches tell me, you can’t lose.”

Defeats, however, have become painfully routine for Krishan. That a lot has been expected of Krishan each time he steps into the ring is natural because of his terrific record across different weight categories – he won the Asian Games gold in the 60kg category in 2010, followed it up next year with a bronze at the World Championship in the 69kg.

Seamless transition: It’s a testimony to his strength and ability to seamlessly transition to higher weight categories and remain a contender. And although there were a few medals of note occasionally, he hadn’t won anything big until the gold in the 75kg on Saturday.

With every loss, his credentials of being one of India’s top amateurs were being scrutinized. But more than the outside world, Krishan is most worried about answering his father. “He (his father) has so much confidence in me that it has put me under a lot of pressure. Most of the times, when I lose I am worried about facing him,” Krishan says. “Frustration generally builds three, four hours before the fight. I get anxious thinking about what will happen in the ring. If I win, everything is ok. If I lose, I have to give answer to my father.”

Krishan says it is the fear of disappointing his father and the rest that distresses him. So much so that it has started to impact his personal life.

He’s become so fearful that even a voice message from his three kids before a bout unnerve him. “But when I lose, it’s always small talk. You can feel the disappointment, so that makes me sad. Like my grandfather is 90 years old, but when I lose…” Krishan doesn’t repeat those four words.

If not his defeat, Krishan says he is answerable to his kids. “Before I came here, my 5-year-old son told me to wear red colour because it’s his favourite colour. Luckily, my every bout was in the red corner else I would have to explain to them as well why I didn’t wear red,” he says.

Krishan doesn’t know the reason he gets stressed out at the minutest of things. He was relatively less anxious on Saturday, he insists, because by the time he walked in, India had already won two gold medals in boxing (Gaurav Solanki and Mary Kom). That had taken a lot of pressure off him, although he still knows he’d have to answer the dreaded question. 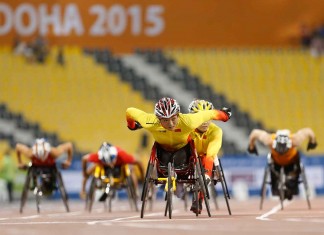 0
Russia’s Vladislav Frolov claimed his second gold of the 2015 IPC Athletics World Championships in Doha, Qatar, one of five athletes to smash world...

ORGANIZERS MEETING FOR THE 2016 SEASON A GREAT SUCCESS

India’s Relationship With Pakistan Should Not be Mixed With Sports: Boxer...