‘I am very happy with the two wins in the opening round of the championship and even I am not very happy with my lap timings, I enjoyed a lot in the second race with a nice battle with Fahid and I hope to improve my time in the coming rounds’ said Abdulaziz after the races.

Fahid Al Sowaidi had a problem with his tyres but he is happy with his result’ I am very happy to be second in both races today. I tried  to stay very close to Abdulaziz and be constant,  but I had a problem with my tyres , it was the first time I used the semi-slick, so I need to adapt myself with the new tyers for next races and find a better set up with this tyers. Thanks to Ooredoo for their continuous support and my mechanics and family and also thanks to QMMF for the organization of this event’ stated Al Sowaidi.

The third position was for Ahmed Al Muyini, also from Saudi Arabia in both races.  Al Muyini is riding in this category for first time as he was riding in the superbike category in the last seasons. ‘ This is the first time I participate in the 600cc and I didn’t had too much practice with this bike but I am very happy with this result and to be in the podium in both races. Many thanks to the Saudi Motorsport Federation for supporting me and I hope to improve more in the next races’.

In the Supersport Chmpionship, there were some women taking part in the champioship and their performace was great.  The American rider Shelina Moreda had great results in both races, finishing in 5th and 6th position.

‘We had some epic battles today, this was an amazing round , all the girls were riding back and forward all the races. I had a big lead in the second race for some laps and a great fight with Manca,  we had a great racing today and I enjoyed a lot. I want to thank my sponsors, QMMF and FIM women in Motorcycling and everybody that is watching us and give us support’ Shelina said after the podiums.

The Serbian rider Manca Katrasnik had a problem just at the end of the first race but she managed to have the bike ready for the second race and she ended in a great 5th position.

The next round of Qatar Supersport Championship will  be on 16th & 17th October as the support race of the World Superbike Championship Qatar Round. 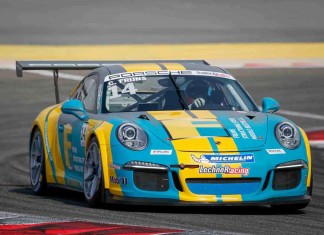 0
Qatar-based, father and son duo Rob and Charlie Frijns will compete in the opening round of the Porsche GT3 Cup Challenge Middle East Season...