Starting from pole position and having won the 2015 edition of the Commercial Bank Grand Prix of Qatar, many saw Jonas Folger (Dynavolt Intact GP) as the race favourite. The German got a great launch from the line and soared into the lead, unaware of the issues unfolding behind him.

Takaaki Nakagami (Idemitsu Honda Team Asia) and Sam Lowes (Federal Oil Gresini Moto2) settled in behind Folger, but the German was off like a rocket and opened up a one second lead by the end of the first lap. Lowes and Nakagami were joined by Tom Luthi (Garage Plus Interwetten) but disaster quickly struck for a number of riders behind.

While this drama was unfolding, Folger continued to push at the front but the German quickly found he had exceeded the limit and fell at Turn 4, crashing out of a comfortable lead on the third lap. “I was pushing really hard to make a gap, it would have been the last lap of pushing hard. It was my fault, I expected a lot more,” he said after the incident.

This handed the race lead to Franco Morbidelli (Estrella Galicia 0,0 Marc VDS), the Italian battling with Luthi out at the front. As Luthi took the lead Nakagami and Robin Mulhauser (CarXpert Interwetten) were also handed ride through penalties for jumping the race start. At this stage Nakagami was sat in third position.

The battle continued to rage between Luthi and Morbidelli at the front, the Italian living up to his reputation as one of the hardest men in the intermediate class, throwing himself up the inside of Luthi whenever a gap opened.

With 15 laps to go Nakagami came into the pits for his ride through penalty, promoting Simone Corsi (Speed Up Racing) to third with Sandro Cortese (Dynavolt Intact GP) right behind him. Luthi and Morbidelli remained locked in combat, two great battles for first and third lifting the crowd to their feet. The Swiss rider showed his experience, staying cool, calm and collected despite the constant assault from Morbidelli.

On lap ten Morbidelli regained the lead of the race and attempted to open up a gap ahead of Luthi. Behind the leading duo, Cortese latched onto Corsi like a rabid dog, doing everything he could to remain with the Italian as they raced for the final podium spot.

The battle for fifth was also thrilling, Luis Salom (SAG Team) leading a group of five riders including reigning Moto3™ World Champion Danny Kent (Leopard Racing). Little did they know this would quickly become a battle for the podium. On the 14th lap of the race it was announced that the race starts of Morbidelli and Cortese, who were at the time in first and fourth, were under investigation by race direction.

Unaware of what was going on, Morbidelli continued to push at the front with Luthi in tow, the Estrella Galicia 0,0 Marc VDS man doing all he could to earn his first race victory in the World Championship.

In the closing laps Morbidelli was able to hold a steady lead of just over a tenth of a second from Luthi but midway through the penultimate lap the Swiss rider saw his chance and began to close in. Unfortunately for the Italian and his team it was announced on the final lap that Morbidelli would be handed a 20 second penalty after the race. Sandro Cortese was also given the same penalty.

This fact was unknown by the leading duo, Morbidelli and Luthi continuing to fight for the win as normal. Luthi just edged out the Italian as they dragged to the line, but it would be of little consequence as Morbidelli found himself pushed down to seventh.

Luis Salom and Simone Corsi completed the podium, both in their first races with new teams. Corsi was also the leading non-Kalex machine, a great first result for Speed Up.

There was a stunning fourth place finish for Hafizh Syahrin (Petronas Raceline Malaysia) who ended ahead of experienced campaigner Dominique Aegerter (CarXpert Interwetten).

On his return to the Moto2™ class, Kent secured sixth ahead of Morbidelli. A great ride after his jump-start penalty saw Alex Rins end the race in eighth ahead of Lowes, who also received a penalty for the same incident.

Completing the top ten was Moto2™ rookie Luca Marini (Forward Team), Rossi’s half brother battling through the pain barrier for a top ten finish after a heavy crash in Qualifying on Saturday. 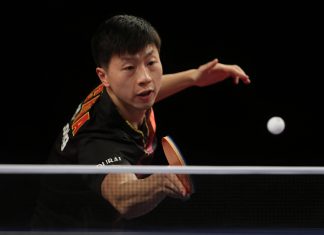 0
The cry of “jia you”, greeted both players, the Chinese fans in the hall with seemingly a slight bias in favour of Fan Zhendong...

Two racers, a seven-point gap and only one Yokohama Drivers’ Trophy:...

QMMF ANNOUNCES MODIFIED ROUTE FOR QATAR’S PUNISHING ROUND OF FIA AND...