Cycling is a comparatively new addition to the country’s rich sporting heritage. But if you write a book on the discipline’s impressive Qatari growth, Sheikh Khalid bin Ali Al Thani will be a prominent presence in each of its chapters.

This is because Sheikh Khalid, Chairman of the Local Organising Committee of the UCI Road World Championships Doha 2016, has been the guiding force behind the sport’s evolution in Qatar.

After being established in 2001, the Qatar Cycling Federation (QCF) moved extremely quickly to launch the region’s first-ever stage race, the Tour of Qatar, a year later. In 2009, more history was created when Qatar initiated the Gulf region’s first women’s event, the Ladies Tour of Qatar.

And in a few days from now, the country will celebrate its biggest cycling success story — the UCI Road World Championships Doha 2016. Sheikh Khalid, QCF president since 2001, was excited to share his thoughts about the mega event’s impending start.

“We have been eagerly waiting this day ever since we won hosting rights for the UCI Road World Championships. Now that it is so near, we are very excited. For a big number of people, this event will be the culmination of years of hard work,” he said, during an exclusive interview session.

When asked about Qatar’s preparedness for hosting an event of this magnitude, his reply was quick and confident.

“If you ask me, we have been preparing to host this competition since QCF’s formation in 2001. One of our main aims had been to bring the UCI Road World Championships to the Middle East for the first time.

“In the past, each time we hosted the Tour of Qatar, Ladies Tour of Qatar and Tour of Zubarah races, we were adding to our knowledge base in anticipation of delivering an exceptional UCI Road World Championships experience. I can confidently say that my team is now ready. We will deliver on our promises,” he said.

Sheikh Khalid was quite happy with the way in which members of Qatari and expatriate populations have taken up cycling.

“In 2001, there were neither infrastructure nor enough aficionados for our sport. Fast-forward to 2016 and we have several iconic parks — at Aspire Zone and near the Doha Sheraton — that provide ample facilities to cyclists.

“Dedicated cycling tracks have been constructed in different parts of the country alongside pedestrian walkways. This is a great initiative by the Qatari government as it promotes our sport in a big way. Hundreds of cyclists make use of these facilities, especially during winters. We’ve seen an explosion of interest in our sport in recent years,” he said.

The top official was also appreciative of older generations of cyclists stepping in to lead younger ones.

“To start with, we had few cyclists, let alone home-grown coaching talent. Things are different now. Experienced cyclists have stepped up to the challenge of mentoring younger ones. For example, Tareq Esmaili, one of Qatar’s first-ever cyclists, is now coach of the national team.

“He has stepped into his new responsibility quite effortlessly. Similarly, I’m hoping to use services of our former athletes to help build a new generation of cyclists,” he signed off. 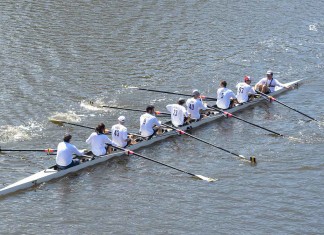 0
MotoGP™ stars swapped the noise of the track for the rather more tranquil setting of the Yarra River ahead of the Australian GP. Marc Marquez, Danilo...