The penultimate race of the 2015 WorldSBK season has been won under floodlights at the Losail International Circuit by Jordi Torres (Aprilia Racing Team – Red Devils), with Jonathan Rea and his KRT team-mate Tom Sykes joining him on the podium. Sykes led from the start, before being passed by Rea and Torres, the Spaniard pulling off an incredible move around the outside of the former champion into turn one at half distance. Interestingly, Torres’ maiden win in WorldSBK maintains Aprilia’s 100% record of podium finishes at the Qatari venue, with the Spanish flag waving at the top for the first time since 2012 at Miller Motorsports Park, when Carlos Checa won the first race. 2015 World Champion Rea gave chase but had to be content with second, his 65th podium. 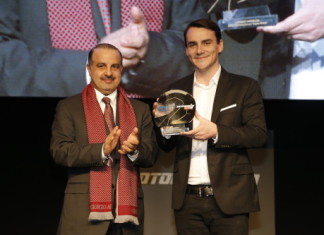 0
The various FIA World Touring Car Championship award winners gathered at a prize-giving ceremony with a difference in Paris tonight. As well as celebrating the...

SCHOOLCHILDREN AND BRAZILIAN PARA-ATHLETICS HEROES MARK ONE WEEK TO GO TO...