The Doha 2015 IPC Athletics World Championships are the largest para-sport event ever to come to the Middle East and will be held at Qatar Sports Club from 21-31 October. 1,300 athletes from 100 countries will be competing to be the best in the world and vie for qualifying spots to the Rio 2016 Paralympic Games.  Tickets are on sale now at https://doha2015.q-tickets.com and in Qatar Olympic Committee booths in Villagio, City Centre and Landmark malls. All proceeds of ticket sales will be donated to charity.

Speaking ahead of the World Championships, Terezinha Guilhermina said:

‘These World Championships are very important because they are going to take place in Qatar, in the Middle East, a place where para-sports are not that well known. I believe that after the World Championships new athletes will emerge on the world stage, taking us to places where we haven’t been before. Being able to participate is such a privilege, and hopefully this world event will leave a legacy for Qatar itself and for the Middle East.’

All three athletes will be looking to use the World Championships to qualify for next year’s Rio 2016 Paralympic Games and the once-in-a-lifetime opportunity to compete in a Paralympic Games in front of a home crowd. Arguably the best female para-sprinter the world has ever seen, Guilhermina will face stiff competition from China’s rising star, Cuiqing Liu, currently ranked second in the world and fast improving. Guilhermina has a total of seven World Championship gold medals, and three gold, one silver and two bronze Paralympic medals. The Brazilian sprinter also holds the world record in the 100m, 200m, and 400m T11 events. You can watch her in action on 22nd October at 21:00 in the 100m final and 23rdOctober at 16:00 in the 400m final.

Speaking about the school visit, Ameer al-Mulla, CEO of the Doha 2015 Local Organising Committee and Executive Director of the Qatar Paralympic Committee said:

“We are very grateful to the Brazilian athletes for taking the time to come down and host a masterclass with our schoolchildren today. They are some of the best para-athletes in the world and they have really inspired the children to see that it is possible to achieve anything despite your circumstance. We hope that hosting the Doha 2015 IPC Athletics World Championships will inspire a new generation of athletes and spread awareness about para-sport.” 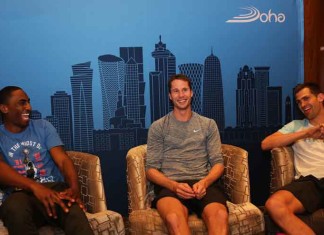 0
I am not prepared for the new season, has no athlete said ever. But the way they put forth their hopes and aspirations for...